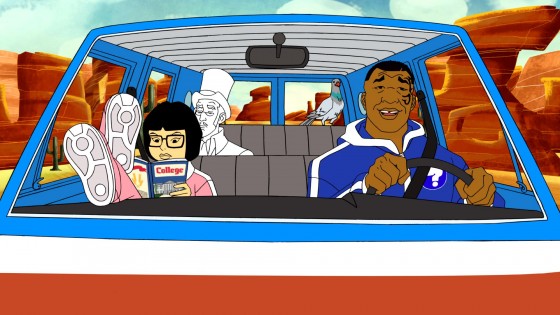 Since it was announced, Mike Tyson Mysteries has been one of our most anticipated new Adult Swim shows and it does not disappoint, as it’s a hilarious, self-aware throwback to old school cartoons like Scooby Doo or Mr. T.

Mike Tyson stars as himself, now retired as a boxer and leading his team of mystery solvers including Yung Hee (Rachel Ramras), his adopted Korean daughter, the ghost of Marquess of Queensbury (Jim Rash) and an alcoholic pigeon who used to be a man (Norm McDonald).  Various people write in to Mike via notes on pidgeons and the team sets out to solve the case, by which I mean Mike punches something.  The cast is great and there’s a wonderful balance between Mike’s incredibly sincere and earnest attempt to help with the rest of the group’s self aware snark and cyncism, especially from Pigeon, who is constantly pointing out how dumb and bizarre everything is.

Another thing I love about the show, at least in the first two episodes, is that the mysteries and personalities Mike and his team have to deal with are incredibly specific and usually completely out of Mike’s wheelhouse.  In the first episode, the gang has to help The Road/No Country For Old Men author Cormac McCarthy come up with an ending for his latest novel and, in the second, the gang heads to IBM headquarters during the big tie breaking match up between Deep Blue and Gary Kasparov.  One of the best sources of humor on the show is taking these kind of high brow personalities and ideas and then just turning them into absolute silliness with chupacabras, ghosts, robots, etc.  Even though the show is one of Adult Swim’s quarter hour shows, it never feels rushed or like it’s missing story or comedy bits.  There’s plenty of time for tangents and bits from Marquess or Pigeon before Mike resolves the plot with his fists.  The look of the show is also great, as you can definitely feel the influences of classic Hanna Barbara cartoons but with the smoothness of modern animation.

If you are a fan of Mike Tyson or the ridiculous celebrity led cartoons of the 70’s and 80’s, Mike Tyson Mysteries is a definite must watch.  It fits perfectly alongside Adult Swim shows like Venture Bros and I can’t wait to see what other mysteries come along for Mike and his team.  You can actually watch the first episode below or catch it at it’s normal time at 10:30 PM EST on Adult Swim.