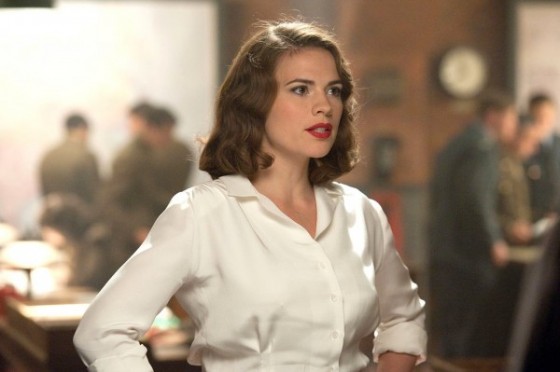 If you are a Marvel fan, next year is going to be insane with Age of Ultron and Ant-Man in theaters, Daredevil on Netflix and Agent Carter debuting on the small screen.  Starring Hayley Atwell as everyone’s favorite SHIELD founder and bad ass secret agent, Peggy Carter, and is set in the 50’s where Peggy is struggling with the chauvinistic heads of the SSR, who don’t believe a woman can handle things in the field.  Peggy gets the chance to show off her skills though as she gets recruited by Howard Stark (Dominic Cooper) to track down and contain various projects and weapons of his design that were stolen while he lays low and tries to find the person or persons who stole them.  To help Peggy, Howard introduces her to his butler, Edwin Jarvis (James D’Arcy), who is required to give Peggy whatever assistance she needs.  During their 75th anniversary special last night on ABC, the first actual clip from the show was debuted, which has Peggy getting her mission from Howard and then heading out to kick ass.  The show starts in January while Agents of SHIELD is on break.