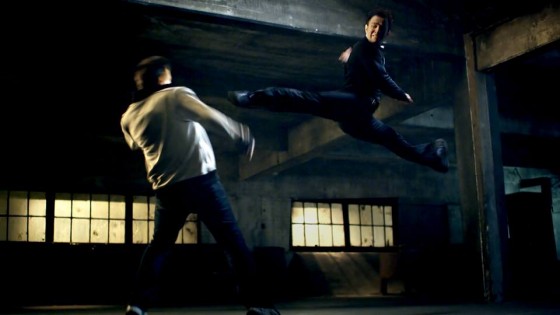 Saw and martial arts, two great tastes that look like they go great together in the new action movie, Die Fighting.  Directed by and starring Fabien Garcia, along with Laurent “Lohan” Buson, Didier Buson and Jess Allen, who are the martial arts/stunt team Z-Team, the quartet finds themselves captured and forced into fighting their way through a sick “script” by the mysterious Director (Dave Vescio), who sends them into various scenarios like trying to rob an armored truck to taking on an entire dojo of black belts.  The fight choreography looks great and it’s trying to pay homage to classic Hong Kong martial arts action movies.  The movie is available right now on Video on Demand and we’ll hopefully have a review up on the site soon.  In the meantime, check out the trailer below.