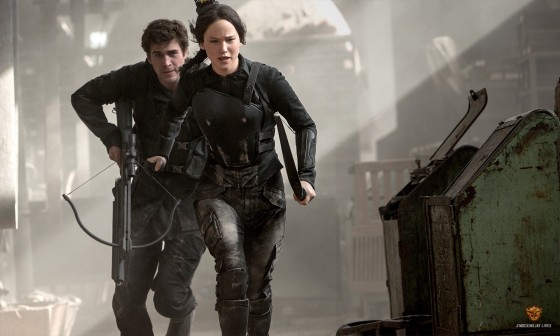 The Hunger Games are over. The Capitol is vulnerable and the remaining Districts of Panem need their Mockingjay to lead them in rebellion. Unfortunately, as far as reluctant heroes go, they don’t get much more so than Katniss Everdeen. Her fellow victor Peeta Mallark is captive in the Capitol, and, traumatized from her experience in the Hunger Games, she can’t even find peace in her sleep, where only pain and guilt wait for her.

Let’s get a few thing out of the way. Yes this is the weakest of the Hunger Games. Yes it’s maddening that just as the plot gets going, the movie ends. The film is rife with problems that are inherent with this two-part finale model. Certain moments are needlessly stretched out, the action is scarce on the ground, and the film’s conclusion feels abrupt. But it left me wanting more, and director Francis Lawrence actually uses the time he has advantageously to develop the themes of the story to there fullest potential, and the few action sequences in the film are made to count.

There have been plenty of war films that revolve around themes of sacrifice and the compromising of values. But I don’t know of any films that address these themes the way Mockingjay does. What about the way we sell war? How much manipulation goes into galvanizing a people to a common cause. The characters talk about propaganda bluntly and use tragedy as photo opportunities, sometimes callously, to paint Katniss as their symbol. The last two films saw the enemy use these tactics to great effect, but by seeing the purported heroes use these tactics as well, it asks questions about what lines are worth crossing for the betterment of a people, and that no one walks away from war clean.

The acting in this film is superb, lead by a masterful performance by Jennifer Lawrence. Julianne Moore is superb as District 13’s President Alma Coin, and the film pays tribute to Philip Seymour Hoffman during the end credits,

As a solitary film it’s not the most satisfying entry. But as the first act of two part piece, it succeeds beautifully. Let’s hope the year long intermission is worth the wait.