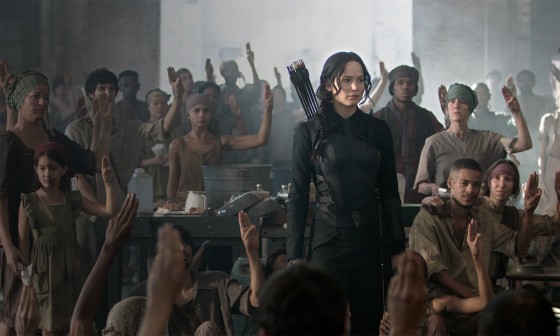 Not surprisingly, Mockingjay Part 1 easily crushed all competition at the box office this weekend with the biggest opening of 2014.  The penultimate movie in the series made $123 million, easily passing the previous highest debut this year, Transformers: Age of Extinction, which made $100 million it’s opening weekend.  Mockingjay is low though compared to the rest of the Hunger Games series, off at least $30 million from both previous films and it’s also low compared to the other “Part 1″s recently like Harry Potter and the Deathly Hallows and Twilight: Breaking Dawn.  It’s still going to be one of the biggest movies of the year if it stays on the track of the other Hunger Games movies.

Big Hero 6 took second with another $20.1 million, putting it over $135.7 million for it’s time out in theaters.  It’s going to have heavy competition this week from Penguins of Madagascar and, if it doesn’t hold steady, it may not be able to crack $200 million.

Interstellar stayed in third with another $15.1, putting it just over $120 million and it will probably wind up in fifth place as far as Nolan’s catalog is concerned.  It’s pretty big overseas, especially in South Korea, where it’s been number one since it came out three weeks ago.

After dominating last weekend, Dumb and Dumber To dropped to fourth after losing 62% from last weekend with another $13.8 million, putting it at $57.5 million for it’s two weeks out but it probably won’t get anywhere near $100 million.

Gone Girl remained in fifth place for the eighth week in a row and has made over $156 million.

Down further on the list, Birdman moved up to ninth with a few more theaters while fellow limited release, the Stephen Hawking biopic The Theory of Everything, took tenth with $1.5 million at 140 theaters, another strong limited release for this year.