I’ve got some recent and older picks to give or receive for anyone who loves action, comics, sci fi and more.

Bond 50 Collection (with Skyfall)- A must have for Bond fans, even if it will be incomplete again next year

Alien Anthology- Alien and Aliens are worth the price of the set, which is fucking gorgeous in presentation

True Detective Season 1- Along with Fargo, one of the best new TV shows of the year

Far Cry 3: Blood Dragon- It’s from last year but Blood Dragon is a must play for fans of 80’s action

Broforce- If Everything Action were making a game, it would be pretty much this

Deadpool- Who wouldn’t want to control the “merc with a mouth”?

Lego Marvel Superheroes- Filled with tons of characters, vehicles, locations and Easter Eggs, this is a must play for Marvel fans.

The Walking Dead Game of the Year Edition- The best game I played last year, if you or someone you know loves Walking Dead or zombies in general, this is a no brainer

Batman: Death of the Family by Scott Snyder- The best arc of Scott Synder’s incredible run on Batman features The Joker taking Batman’s “family” hostage and putting him through a twisted display of affection.

Ready Player One by Ernest Cline- Jam packed with 80’s pop culture references and just general nerdiness, it’s a no brainer for pretty much any kind of nerd on your list

The Action Hero’s Handbook by David Borgenicht- If you or someone you know wants to learn how to fight a shark, do a vulcan nerve pinch or negotiate a hostage situation, this is the book to get. 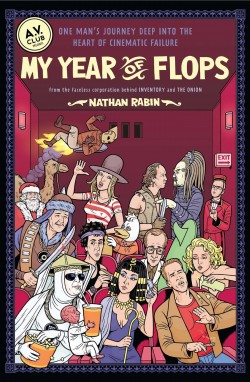 My Year of Flops by Nathan Rabin- The perfect gift for bad movie fans, Nathan Rabin informs and cracks up with his deep dives into some of the most infamous bombs in movie history.

Funko Mystery Sci Fi Minis- You get a random sci-fi character in each box but they are all super cool looking and you really can’t go wrong with whichever one you get.  If Funko makes an action movie series though, my wallet is dead.