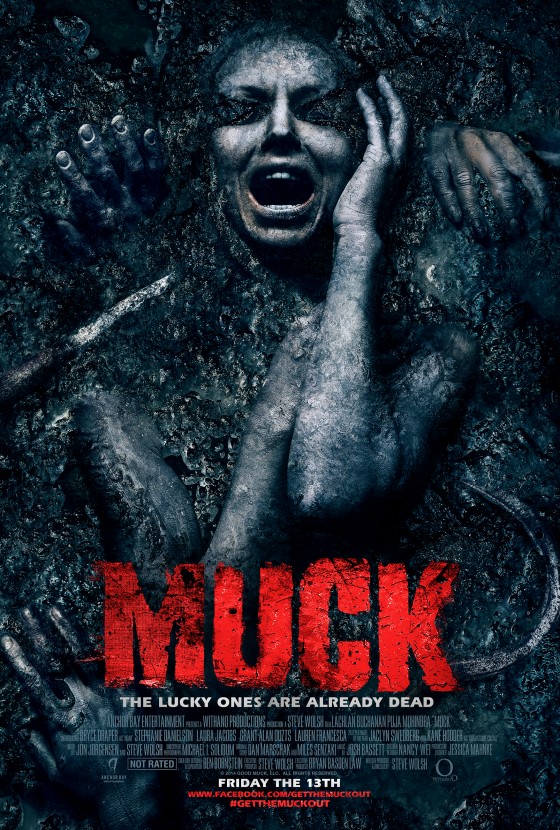 Anchor Bay is delivering some self-aware, old school, bloody horror next March with Muck. Check out the official plot synopsis below:

After narrowly escaping an ancient burial ground, long forgotten and buried underneath the marshes of Cape Cod, a group of friends emerge from the thick, marshy darkness, tattered and bloody, lucky to be alive. They have already lost two of their friends in the marsh, presumably dead. They stumble upon an empty Cape Cod vacation house alongside the foggy marsh and break in to take shelter. Whatever was in the marsh is still after them and soon after one of them goes for help, the rest of the group learns that the evil in the marsh is not the only thing that wants them dead. Something worse, something more savage, was lying in wait just outside the marsh, in the house. What happens next is unspeakable horror that cannot be unseen. These unlucky travelers spend their St. Patrick’s Day trapped between two evils forcing them to fight, die, or go back the way they came.

Starring Kane Hodder, Lachlan Buchanan, Bryce Draper, Jacyln Swedberg and Lauren Francesca, the movie is actually hitting select theaters on Friday, March 13th and hits on St. Patrick’s Day on Blu Ray and DVD.  I’m intrigued by the plot synopsis where it seems like we’re picking up at the end of one horror movie scenario but this group is unlucky enough to stumble into another and the two evil forces are competing to kill the survivors.   Check out the trailer below.