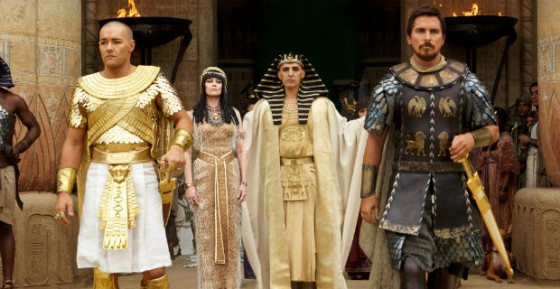 A huge step up from last year’s unbearable The Counselor and much better than director Ridley Scott’s last historical epic, Robin Hood, Exodus: Gods and Kings still doesn’t reach the levels of Scott’s best like Gladiator or Kingdom of Heaven.

Retelling the Biblical story of Moses and his quest to free the Hebrews from Egypt, Christian Bale steps into the robes and sandals of Moses while Joel Edgerton plays his adopted brother turned enemy Ramses.  Bale is fine but he’s not really doing anything that sets it apart from John Connor/Bruce Wayne/etc. and does his usual whispery serious voice the entire time.  The cast has gotten some heat for being white washed and it is kind of strange that actors like John Turturro and Sigourney Weaver are cast in roles that last about five minutes a piece and they are seemingly only there to get their names on the marquee.  Same thing goes for Aaron Paul, who we all love, but he has literally nothing to do in this movie and it’s distracting, at least to me, to see Jesse wandering around Ancient Egypt.  Ben Kingsley shows up in his usual older mentor role but is also just kind of there.  Outside of Bale and Edgerton, no one really stands out and there’s only so much these two can carry on their shoulders.

If there’s one thing Ridley Scott is excellent at though, it’s staging epic sequences and there are some fantastic ones in Exodus.  The plagues hitting Egypt are horrifically overwhelming as swarms of crocodiles, frogs and locusts overwhelm the capitol of Memphis and massive tornadoes drop golf ball sized hail and the citizens start to become infested with boils and sores.  The finale at the Red Sea is also pretty spectacular and, much like a lot of the events in the movie, Scott makes it slightly more realistic as the parting is more of a tidal event than an instantaneous path created by Moses.  There’s also the typical Ridley Scott battle sequence to kick things off.  There are some kind of bizarre choices though, not the least of which is Scott’s portrayal of God as a weird British kid, who has many conversations with Moses where he’s berating him for not doing things faster that just feel awkward and it’s not clear exactly what Scott is trying to do.

Although this isn’t quite Ridley Scott at his best, it’s a big step up from his last few films.  Christian Bale and Joel Edgerton carry the movie and there are some epic sequences but there’s also some long stretches between those epic sequences.  If you’re a fan of Scott’s historical epics, it might be worth checking out on the big screen, otherwise, you can probably wait or see it during a matinee.