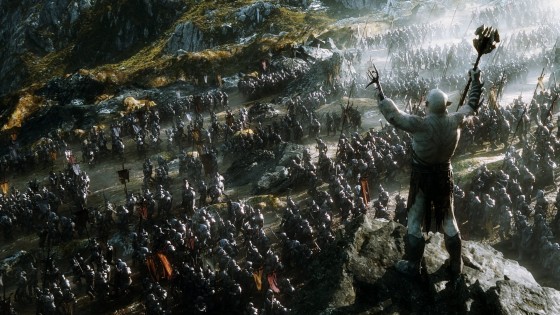 The Hobbit: Battle of the Five Armies easily took the spot in the final weekend before Christmas, although it was the lowest opening in the new trilogy with $56.2 million and over $90 million since it opened on Wednesday last week.  If it can stay on pace against the slew of new releases next week, it should be able to pass The Desolation of Smaug and become the highest earner of the new trilogy.

In a far distant second was Night at the Museum 3: Secret of the Tomb, which took in $17.3 million.  The second movie made over $54.2 million, so Secret of the Tomb is way off and it’s even low compared to the first movie’s $30.4 million opening.  It seems like a similar situation, although not quite as disastrous, to Sin City 2 earlier this year, where it’s been so long between entries that interest has completely waned.

Annie took third with $16.3 million, which is actually decent as far as movie musicals go.  It’s eighth overall in the genre behind Muppets Most Wanted earlier this year but it will face direct competition next week when Disney’s big budget musical Into the Woods debuts.

Exodus: Gods and Kings took a massive dive, losing over 66% of it’s box office after it’s number one debut last week and dropping to fourth now with $8 million.  If it’s lucky, it will get to $70 million but that will cover only half of it’s budget.

Mockingjay Part 1 rounded out the top 5 with another $7.8 million and it’s going to be a close race to the finish to see if this or Guardians will be the number one movie of the year.

Wild and Top Five expanded wide this past weekend and the former did a solid $4.15 million at a little over 1,000 theaters and it end up earning between $40 and $50 million.