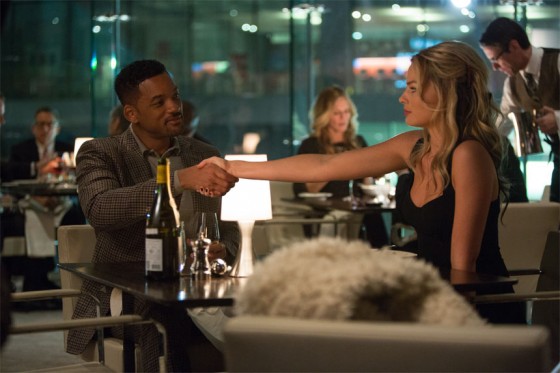 Focus manages to unseat Fifty Shades of Grey but it wasn’t exactly a hit for Will Smith.  The con artist movie made a little over $19 million, putting it above movies like Seven Pounds but well below Smith’s last big miss, After Earth, although the budget is probably a bit lower for Focus.  After Earth made $27.5 in it’s first weekend.

Kingsman remained in second with another $11.8 million and it’s made a little over $81 million for it’s three weeks out.

Spongebob also stayed where it was in third place with another $11.2 million.

Fifty Shades dropped from first to fourth with $10.9 million, barely edging out newcomer The Lazarus Effect, whic took fifth with $10.6 million.  Fifty Shades should end up making around $165 million while The Lazarus Effect was on the low side of the Jason Blum horror factory releases, barely beating Dark Skies but much lower than movies like Insidious, Sinister, Ouija, and all but the first Paranormal Activity.

Elsewhere on the chart, The DUFF and Hot Tub Time Machine 2 both plummeted from last week’s opening, with The DUFF going from fifth to eighth with $7.2 million while HTTM2 barely stayed in the top 10, taking tenth with $2.4 million.

Probably boosted by Julianne Moore’s Best Actress win at the Oscars last weekend, Still Alice made it onto the top 10, taking ninth with $2.7 million.