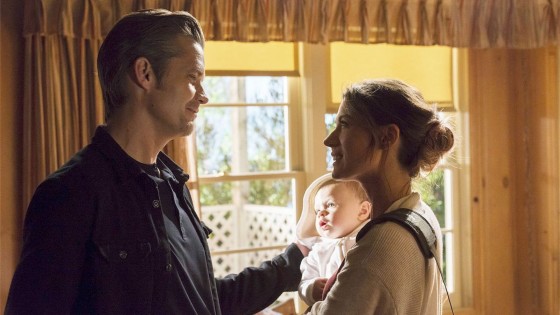 If Raylan and Boyd are the epicenter of the chaos that is “Justified”, then the women linked to them are equally as important. Ava Crowder dealt a crushing blow to ex-husband and Boyd’s brother Bowman, only to be involved with the Boyd’s criminal empire. Raylan has always had Winona by his side, on and off at least, which was only complicated by the birth of their daughter.

This being the final season, the similarities between Raylan and Boyd are more glaring than ever in “The Hunt”. And while the title alludes to the search for AWOL henchman Walker, it almost could mean the hunt for stability for our main two characters.

But first, Walker. Following the intense shoot-out with the Marshalls that left Choo-Choo dead, the Marshalls are hot on the trail of Walker. It also doesn’t help that Markham now views him as dead meat, even going so far to paying Walker’s dear friend Sean not to intervene.

Another lingering scene from last week was Boyd’s closing call with Limehouse. Limehouse gives Boyd the lowdown on the fact that Ava was looking to leave Harlan forever. Crafty Boyd surprises her next morning with an impromptu trip up to his family’s camp in Bulletville. Ava starts getting more scared, thinking the secluded hunting camp would be the perfect spot for an “accident” at the hands of Boyd that could leave her dead.

And it almost goes down like that. But Boyd does finally press her about what he learned from Limehouse before she finally spills the beans about her working as a CI for Raylan. Boyd of course feels betrayed but seems more worried about her possibly having an affair with Raylan. Boyd gives a gun to Ava imploring her to finally pull the trigger but she declines saying she’s on his side more now than ever. This could be seen as a strong endorsement that Boyd was willing to put his life on the line at the hands of Ava, but as we see him switch the gun’s chamber from empty to full, it seems that’s another bluff.

Raylan, on the other hand, is visited by his beau Winona and his daughter Willa. Raylan experiences first-hand how complicated child-rearing can be, especially for Winona by herself. Raylan emphasizes that he is back to her as soon as his case against Boyd is finished, but she has her doubts. That is until she confesses that she misses him and his uncertainty in relation to his job so much that she’s be with him anywhere. And he won’t have to give up his job.

But as Ava’s confession shows, her cover’s been blown. Boyd is now the wiser. That still leaves Markham and his grand plan. Could Raylan and Boyd team up to take out a common foe in Markham? Or could their bad blood finally boil over?