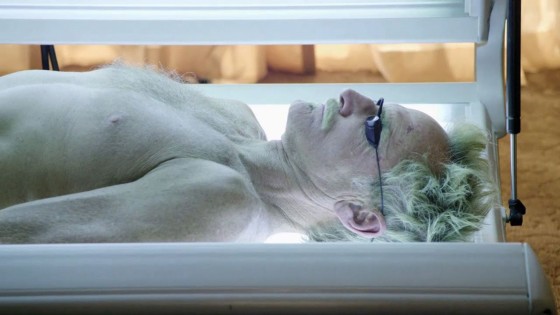 One of the most impressive things about “Justified” is its use of secondary characters. Besides Raylan and Boyd, the others have mostly been given their own colorful backgrounds and pasts. It seems like no one is really overshadowed.

Case in point: Wynn Duffy. Originally a quick baddie from “Justified”‘s early case-of-the-week days, Jere Burns as Wynn has flourished since as a nuisance behind the scene. A lynchpin but a comedic one at that.

This season, there’s been lingering tension on who was the rat that sent Katherine Hale’s husband to jail. It’s been alluded to Markham on several occasions, but we find out early here that it was Wynn all along. The Marshalls are quick to pull him in, in exchange for protection. Wynn is between a rock and a hard place.

Katherine herself is still interested in finding the rat, but for now she’s riding Markham’s coattails. Markham continues to make his plea to Harlan’s residents to sell their land but it hasn’t worked on everyone. Loretta McCready is visited by a sinister-seeming henchman of Markham’s named Boon. Boon makes his presence clear in Loretta’ house.

Scared, she visits Boyd asking for protection. Boyd offers to back her in her plan to usurp Markham’s existing deals, but warns her that while Boyd is bad man Markham is much worse.

Things comes to a head at Markham’s pizza party; held to appeal to remaining land owners. Loretta makes her own strong appeal here to land owners: back her and her Harlan roots instead of big city Markham. She’ll offer money and Boyd’s protection but will also promise not to run off with it like Markham will. Boyd appreciates the business but not the grandeur involved, which is sure to enrage Markham like never before.

Meanwhile, Boyd is finally planning to blow the floor beneath the vault and get Markham’s money. A scared Ava tips Raylan off at the pizza point, but the plan never goes through. A final act of sabotage by Zachariah nearly dooms Boyd but at the least foils his dynamite plan for the time being.

A hysterical Boyd accuses Ava of selling out to her uncle and his sabotage, but Ava rightfully denies any involvement. For Boyd, this only seems to be a hiccup. A reflective Raylan remarks that Boyd will now go after the money harder than ever before. Only time will tell how dangerous his new plans will be.