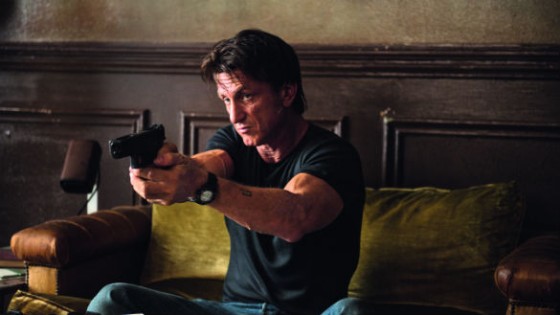 Sean Penn is the latest prestigious actor to throw his hat into action ring following the success Liam Neeson has had in recent years and, while he’s probably the closest to matching Neeson so far, The Gunman is just average at best.

Penn plays Jim Terrier, a mercenary working in the Congo who is tasked with killing a mining official of the Congo government.  Terrier is forced to flee the country but 8 years later, he’s back in the Congo working for a humanitarian group when he’s attacked by hitmen and he starts to unravel a plot to clear house by his former employer.  The Gunman seems to be trying bring some Bourne style sophistication to the plot but the problem is that everything about Terrier’s investigation just feels like padding as the villains are so blatantly obvious to even the most casual action fan, so none of the revelations have that much of an impact.  When Terrier finally has the whole picture about halfway through, it finally picks up to a fun action level but the first half is kind of a slog.  The reason Taken is the gold standard for this new trend of action is the brutal efficiency of it’s plot.

Credit to Penn for going all in as far as looking the part of an action star.  He clearly put himself on some sort of insane workout regime (which he shows off at pretty much every opportunity) and he handles himself well with the requisite knives and guns but he just feels too grim and boring, character-wise.  His biggest characteristic is that he learns he has some brain damage due to his mercenary past and it effects him whenever he has to switch to action mode, blurring his vision and giving him migraines.  The supporting cast is great but no one really sticks around long enough to do anything really significant.  Idris Elba basically shows up for one scene to have a veiled conversation with Penn and then leaves, Javier Bardem is a drunken asshole who’s only around for the first half and Ray Winestone comes in and out for short bursts as Terrier’s friend and backup, Stanley.  French actress Jasmine Trinca is Terrier’s love interest, Annie, but she is just a generic damsel in distress.

Taken director Pierre Morel is behind the camera for The Gunman and he brings a solid eye to the action but nothing really stands out, besides featuring more blood than Taken.  I did appreciate that the action sequences of the second half take place in some fairly unique locales, like an aquarium and a bull fighting ring.  The bull fighting ring in particular lends some unique opportunities and a bull factors in in a pretty fun, ridiculous way.  Surprisingly, there’s no car chases and instead, all the action sequences are shootouts or hand to hand fights.

If you’re looking for a decent action movie or are curious about Sean Penn, action star, The Gunman might be worth a rent but it’s definitely not rushing out to theaters to see.