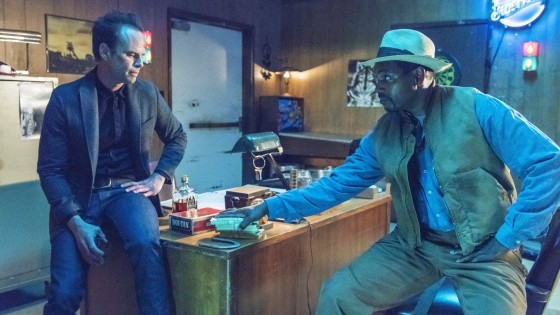 This episode of “Justified” is entitled “Trust”, which is something that the characters have all strived for but have trouble holding on to. For Boyd, it’s trust in his darling Ava, whom he’s gone through harm’s way for and has also thrown under the bus. For Raylan, it’s the right and lawful thing and maybe even a thing for Ava. And for Ava, it’s even less clear. It could be for Boyd, it could be for Raylan or it could be for herself.

It becomes clear in the final scene that she’s sick of being at the bidding of any man. She doesn’t have a deal anymore, Boyd is becoming a liability and she doesn’t want to go to jail.

It isn’t a surprise that Ava ditches both Raylan and Boyd and runs off, it’s a surprise that Raylan couldn’t see the wool pulled over his eyes. Ava does give him a trip down memory lane, remarking how different her life could’ve been had he never left Harlan. But to see Raylan completely fooled like this is indeed a surprise. It’s clear now that he sees Ava differently than any other CI.

For Boyd, it’s another stroke of bad luck. Following the mine fiasco, he switched to a less-dangerous Plan B: kidnapping Katherine Hale to blackmail Markham. And Markham delivers to get his beau back, even if it costs $10 million. Boyd’s parting slip that Katherine had it in for Markham because she thought he killed her husband is a blow.

Markham has enough on his plate trying to sabotage Loretta’s plans without creating suspicion. His wildcard is his crazed gunman Boon, who not takes out Loretta’s great-aunt but manages to creep out some diner hipsters in the process.

But for now, the focus is on Ava. Stuck between a rock and a hard place all season, it makes sense for her to go her own way. No matter how Raylan, Boyd or the fuzz respond.