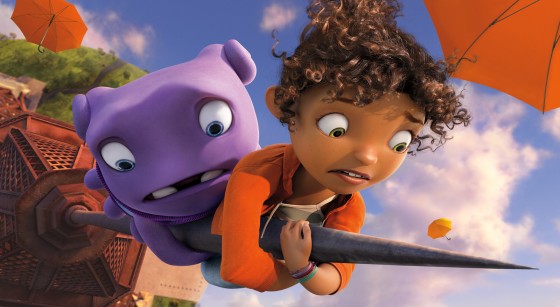 Dreamworks’ latest animated feature Home easily took the top spot at the box office with $54 million, close to but a little lower than recent animated movies like Spongebob: Sponge out of Water and Big Hero 6.  It’s the highest debut since Dreamworks joined up with Fox in 2013 and one of the highest non-sequel debuts for Dreamworks.

Get Hard took second with $34 million, which was the third best live-action debut for Will Ferrell and the second best opening for Kevin Hart.  Word of mouth is OK and the reviews are bad and Furious 7 is going to steamroll everything this coming weekend, so this could have a massive drop off, although it’s the only big R rated comedy in theaters.

Insurgent dropped from first to third with a 57% drop off from last weekend, taking in another $22 million and putting it over $86 million for it’s two weeks out.

Cinderella dropped to fourth with $17.5 million and it’s crossed over $150 million for it’s three weeks out.

Indie horror hit It Follows expanded wide this weekend and took fifth with $4 million.  The movie was originally going to be on VOD this past weekend but it’s limited release performance and word of mouth made Radius TWC move it to a nationwide release and it’s going to even more theaters this coming weekend

The Gunman took a massive fall and dropped from fourth to tenth with only $2 million in it’s second weekend and probably confirming this is the first and last time we’ll see action hero Sean Penn.  Run All Night took a pretty big tumble as well, although it’s in it’s third week of release.

Battle at the Box Office 4/6