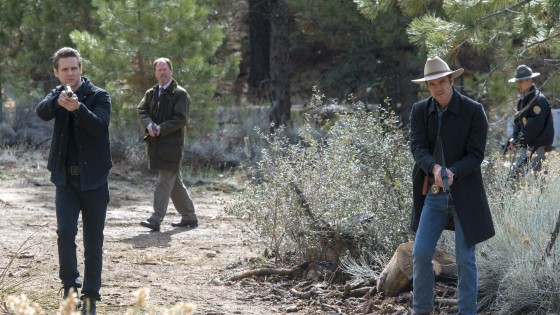 Loyalty will only get you so far on “Justified”; either you’re useful or you’re useless. And that most likely means you’re dead. Ask anyone who’s aligned with Boyd or Markham. The criminal empire business is tough if you’re not at the top.

It’s especially tough now with Boyd and Markham in desperate times. Boyd is recovering in the hospital following Ava’s betrayal, and Markham is plotting on getting his money back while also holding onto his Harlan pot land plot.

Boyd is more desperate. Held up in the hospital, Raylan promises to keep an eye on him to make sure he doesn’t interfere with Ava or the money. But this is for naught, as Markham frees Crowder crony Carl to kill Boyd only to find him aligning back with Boyd. And that to is for naught, as Boyd is quick to dispose of Carl post hospital breakout. With his back against the wall, Boyd is especially dangerous.

For Markham, it’s finding out where your true alliances are. He has his doubts about Katherine but the passion is still there. And there’s Boon at his side, providing just enough creepy to keep Loretta at bay. But his plan to recruit Carl and Earl comes up empty.

That is until Mikey’s plan to rat out Wynn Duffy ends up in curtains for Katherine. A shell-shocked Markham is taken aback by Raylan’s news and advises him to plan his next move wisely.

For Ava, being on the run with Zachariah is turning into trouble. She knows it’s only a matter of time before the marshals or Boyd catch up with her. Boyd is a madman, but Raylan is threatening his lawman career to see this to an end. At this point, nobody knows which one is more dangerous.