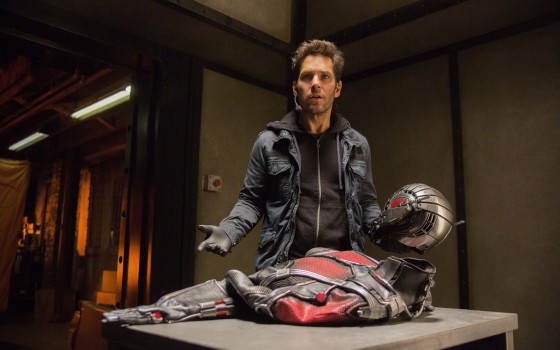 The first Ant-Man trailer set a weird somber tone with a Michael Douglas monologue and only a glimpse of Scott Lang (Paul Rudd) as Ant Man.  This new trailer is the complete opposite, full of awesome looking action, lots of shrinking and an awesome looking villain in Corey Stoll’s Yellowjacket.  Stoll has taken over the original Ant Man, Hank Pym’s (Michael Douglas) company and Pym recruits Scott to break in and steal the technology before Darren Cross (Stoll) can turn it into a weapon.  Hank’s daughter, Hope Van Dyne (Evangeline Lilly) is on hand to help train and guide Scott as well.  There was a lot of trepidation when original director and nerd icon Edgar Wright dropped out but it looks like there’s still a lot of fun to be had in Ant Man, especially when Scott is shrunk and fighting various thugs and when Cross gets his own shrinking armor, there’s a great contrast between the epicness of the battle on the small scale and what’s actually happening from a normal perspective.  It’s out in July to close out Phase 2 of the Marvel Cinematic Universe and you can check out the new trailer below.