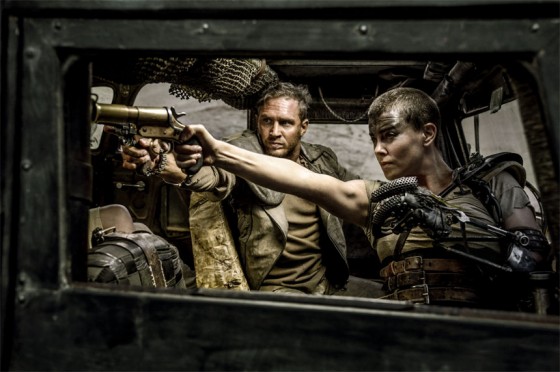 It’s been 30 years since the last entry in the Mad Max series but after a few years directing family fare like Happy Feet, George Miller returns with a brutally insane, incredible new entry in the post-apocalyptic franchise.

The world has collapsed even more into chaos since Beyond Thunderdome and Max (Tom Hardy) is initially captured by the “War Boys” of Immortan Joe (Hugh Keays-Byrne), a disgusting sack of a cult leader who promises his followers entry to Valhalla for their deaths and has a harem of “breeders” that he forcibly impregnates to try and create an heir that is not a genetic freak.  All of this is too much for Imperator Furiosa (Charlize Theron), who rescues the women and steals a War Rig semi truck.  Max joins forces with Furiosa when he’s involuntarily brought along on the first massive chase sequence as an unwilling blood donor to War Boy, Nux (Nicholas Hoult), strapped to the hood of a hot rod.  The entire movie is basically one massive chase and the plot is as streamlined as possible in order to give the maximum amount of time to Miller’s incredible imagery and world building.  Almost every still frame from this movie could be framed on a wall and the amount of creativity on display with the various vehicles and characters is staggering.  There’s literally an entire car in Immortan Joe’s hunting party whose only purpose is to carry a guitarist with a flame throwing guitar who just shreds non-stop. There’s lots of similarities to post-apocalyptic movies and games, like Borderlands, that have come around since Thunderdome but this is the master returning to show everyone how it is truly done.

Tom Hardy ably steps into the shoes of Mel Gibson, matching his gruff attitude while adding the slim glimmer of humanity that is left in Max that allows him to help Furiosa and the girls.  Not that they probably wouldn’t be fine without him because Furiosa is easily the equal of Max and Charlize Theron is incredible in the role that will probably go down as one of the most bad ass female action heroes of all time.  It also never devolves into a cliche romance, they just develop a deep mutual respect for each other.

Fury Road also proves that you can have all the CG wizardry in the world but it will never top throwing real cars into each other at insanely dangerous speeds.  Miller gathered a fleet of vehicles and stages one incredible action sequence after another with real stuntmen and actors in danger and he’s also constantly throwing in things you’ve never seen before, like guys bobbing back and forth onto the War Rig via ridiculously tall metal poles.  When Miller does use CG, it’s just to enhance the insane practical stunts, like a mind blowing sequence that takes place in a massive sandstorm/thunderstorm/tornado.  I feel like the only thing that is going to even possibly come close to the action of Fury Road is Tom Cruise’s ridiculous airplane hang in the upcoming MI: Rogue Nation.

If you’re a fan of the Mad Max series and you have not seen Fury Road, drop literally everything you are doing and get to a theater.  It’s the end of The Road Warrior expanded to 2 hours with a budget George Miller could only imagine in his wildest dreams back in the 80’s, letting him hire a small army of vehicles and crazed stuntmen to drive and jump off of them.  This is a masterpiece from an action master.

Review: A Million Ways to Die in the West