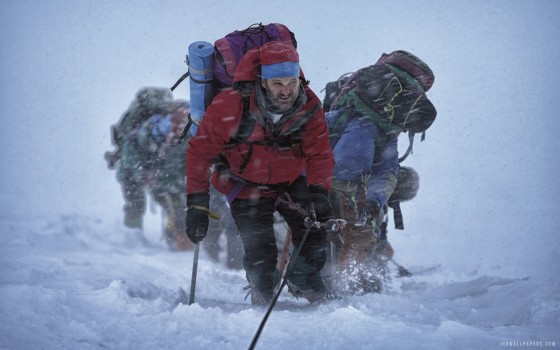 After teaming up with Mark Wahlberg for two fun but dumb action movies, Contraband and 2 Guns, director Baltasar Kormakur is stepping things up in a huge way for his new movie, Everest.  Based on the true events of the 1996 disaster on Mt. Everest, two expeditions trying to summit the mountain were caught in a devastating blizzard and eight climbers died.  Jake Gyllenhaal and Jason Clarke are the leaders of the expeditions in the movie and they have Josh Brolin, Michael Kelly, John Hawkes and Sam Worthington along with them.  Robin Wright, Keira Knightly, Emily Watson, Clive Standen and Vanessa Kirby round out the ridiculous cast and the movie was shot on location in Nepal and Universal is really promoting the IMAX 3D version of the movie.  It’s out in September and you can check out the trailer below.