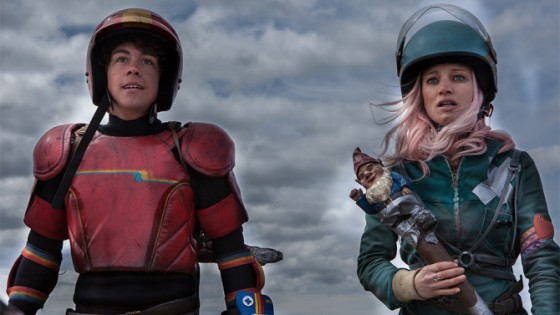 Making a big splash at Sundance and SXSW this past spring, Turbo Kid is arriving in select theaters this August.  Starring Munro Chambers as the titular kid, who is living in a post apocalyptic wasteland and dreams of being a comic book superhero like Turbo Rider and he gets his chance when he must rescue his friend (Laurence Leboeuf) from a group of crazy marauders.  Luckily, he finds a suit armed with a turbo blaster and is able to splatter the marauders in hilariously over the top fashion.  Michael Ironside co-stars as the head of the Marauders and the movie is a joint project between Ant Timpson, who directed a segment for ABCs of Death and the movie Housebound, and Jason Eisener, who directed Hobo with a Shotgun.  It looks fantastic, with kind of a Goonies vibe mashed up with a horrifically violent Mad Max movie.  Check out the trailer below.