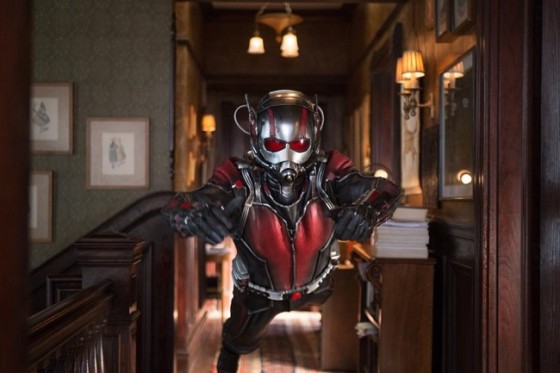 Despite the behind the scenes controversy leading up to it, Ant-Man maintained Marvel’s domination at the box office, although it was one of the lowest opening movies in the series.  Only beating The Incredible Hulk, Ant-Man made $58 million over the weekend, slightly below predictions that it would make $60-$65 million.

Minions fell almost 60% from last weekend’s $115+ million opening, making $50.2 million and dropping down to second place.  It’s made over $216 million for it’s two weeks out.

Trainwreck had a strong opening for an R rated comedy with $30.2 million.  It’s Judd Apatow’s second highest opening behind Knocked Up and a great start for Amy Schumer’s movie career.

Inside Out and Jurassic World rounded out the top 5.

Further down the list, The Gallows nose dived, as we’ve come to expect from found footage horror movies, dropping from fifth to eighth with $4 million.

In limited release, Mr. Holmes took tenth place with $2.5 million in 363 theaters, which is $6,857 per theater.  The movie has Ian McKellan as an older Sherlock Holmes, who is trying to solve his final case.