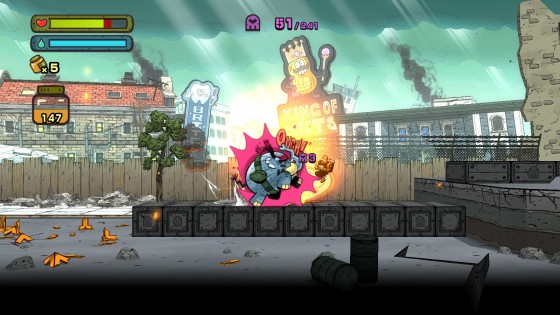 Besides trying to save Gotham City in Batman: Arkham Knight, I’ve gotten the chance yet again to check out a bunch of other games on both the PC and the new PS4.

Tembo the Bad Ass Elephant: Published by Sega and developed by Game Freak, the studio behind Pokemon, Tembo the Bad Ass Elephant is an excellent action platformer that will probably draw comparisons to Sonic but it’s actually much more similar to another Genesis classic, Rocket Knight/Sparkster.  Called in to help free a country under siege by an evil army, Tembo is armed with a charge attack that lets him destroy buildings and take out the various tanks and other weapons of the bad guys.  Much like Rocket Knight, you have a variety of moves once you are in charge mode and you have to learn how to quickly use them to get the most points and navigate the obstacles of the levels but it’s also your main attack power.  It’s currently out on PS4, PC and Xbox One.

Speedrunners: Speedrunners has been around for a bit now but I got the chance to check it out with a ton of new secret characters like the runner from QWOP, the Goat from Goat Simulator and more.  Speedrunners is a great multiplayer game that takes games like Super Meat Boy or N++ and throws three other players into the same level to race.  If you fall behind, you are eliminated and the last player standing wins.  Each character has a grappling hook that is essential to making it through the levels faster and you also have to learn the best lines in each level to hit the boost pads and get power ups.  It’s currently out on Steam.

No Time to Explain Remastered: No Time to Explain has come a long way from it’s Flash game beginnings and now the definitive version is available on Xbox One and PC.  The game has the fantastic premise that a version of yourself from the future arrives for some reason but is quickly and horrifically attacked by a giant space crab and you must use his dropped laser gun to both fight and navigate your way through the levels.  It takes a bit to learn how to actually use the laser cannon but it’s a little bit similar to playing something like Lunar Lander, where you have to use small bursts along with a big burst of acceleration.  It’s got a great sense of humor and there’s tons of variety in what you have to do in each level and the game also throws in alternate version of your character who have different guns that function differently than the jet pack beam laser you normally have.  You can get the game on Steam here: http://store.steampowered.com/app/368730/

Rocket League: Everyone’s playing Rocket League and if you have PS Plus, you had better download it for free before the end of the month because it is one of the most fun multiplayer games of recent memory.  Essentially soccer with rocket powered cars, the game has 1v1 up to 4v4 matches and they are all usually chaos.  The cars have the ability to jump and double jump and/or flip in midair, which lets you simulate doing bicycle kicks, headers or just normal passes.  You unlock lots of goofy accessories for your car to customize it and the matches are all five minutes, so it’s the absolute perfect pick up and play game.  The game is also on PC but at the regular price of $20.

Zenzizenzic: Adult Swim Game brings a senses shattering bullet hell shooter to Steam with Zenzizenzic.  It reminds me of games like Everyday Shooter but crossed with the trippy visuals and sountrack of Rez.  You are controlling a “ship” that has to survive levels full of bullets, lasers and missiles but your ship is equipped with screen filling special weapons as well to even the odds.  There are a ton of options to customize the difficulty and enemies as well.  I usually prefer slightly more “realistic” shooters but if you are down with it’s trippy craziness, then you can check out the game on Steam.

Brawlhalla: I actually got this game in my most recent Loot Crate and I had never heard of it before then.  Putting in my code, I found out that it’s basically a 2D brawler in the vein of Super Smash Bros. Coming from Blue Mammoth Games, you get to choose from a variety of “Legends” who have been seemingly plucked from various time periods and then battle three other characters in arenas.  The gameplay gimmick that puts it apart from SSB is that you start out with no weapons but during the fight, weapon pods drop into the the arena and picking them up will randomly give you one your characters two main weapons.  Some characters have a melee/gun combo while others have two melee weapons.  The controls are similar to Smash in that you have powerful moves that will knock the opponents out of the arena if they have low enough health along with some quick hit combo moves.  The levels are not as crazy as Smash but still require some higher level platforming skills.  You can jump into the game on Steam through Early Access.