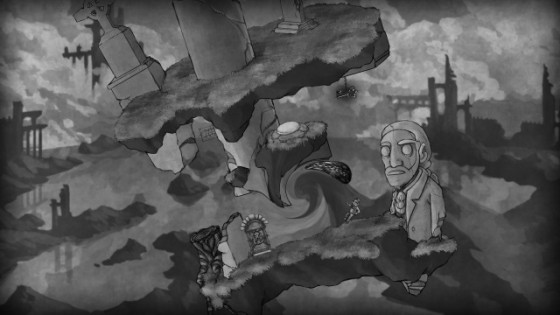 Besides beating Arkham Knight, we got the chance to check out a bunch of new indie games, a game we’re a little late to the party on and more for this edition of Gamebox 2.0.

The Bridge: If you were a fan of Braid, The Bridge is going to be right up your alley.  Playing some sort of scientist, possibly modeled after MC Escher, you explore a strange universe where the entire world is able to be rotated in order to make your way through the levels.  Just like Braid, the story has to be gathered through clues in the world and some vague end of level story bits but the story is secondary to some excellent puzzle designs where you have to manipulate boulders, switches and puzzles by spinning the entire world with either buttons or, on the PS4 where I played, using the motion controls of the Dualshock 4.  You have the ability to rewind time as well if you get stuck as well but that’s not a primary tool, unlike Braid.  It’s definitely worth checking out and it’s available on pretty much every console.

Adventures of Pip: With former team members from Wayforward, who created games like Contra 4 and Ducktales Remastered, Adventures of Pip is a fantastic old school platformer…with a twist.  When the evil Queen Derezzia returns and kidnaps Princess Adaline, she transforms the King and Queen into single pixels by corrupting the power of the “Bitstream”.  The only person who can stop her is Pip, who starts as single red pixel but is able to evolve up to 32 bit hero.  The really awesome part of the game is that you have to constantly switch between Pip’s different forms to make it through the levels.  For example, single pixel Pip can glide and jump higher but doesn’t have the attack powers of the 8 bit and 32 bit Pips.  The game has a great sense of humor and is a winking homage to games like Zelda and classic SNES/NES platformers.  It’s available right now on Steam, Wii U, iOS, PS4 and will be on XBox One on 8/21.

The Order 1886: Having just recently gotten a PS4, there are a bunch of games that we missed when they came out and one I was just able to play through was The Order: 1886.  Getting pretty mixed reviews when it came out, I can definitely see being disappointed if you payed the full $60 for it when it first came out but it’s basically the perfect rental game, which is how I played it.  I’ll echo what most of the reviews said when it first released by saying this game is absolutely gorgeous looking.  The character models, settings and lighting effects are stunning and I love the steampunk Victorian London you play in and you can almost never tell when a cutscene ends and the gameplay begins.  The game is pretty quicktime event heavy and the part they sold the game on, fighting werewolves, is by the far the weakest part of the game.  The two werewolf fights are pretty terrible but the fights with actual humans are all super solid, cover based action.  If it’s in a Redbox or you still have a video store near you, it’s definitely worth playing through on a weekend.

Game of Thrones Episode 5: A Nest of Vipers: The penultimate episode of Game of Thrones continues the excellent story of the series and culminates in one of the most brutal choices I’ve ever had to make in Telltale Game. In A Nest of Vipers, you’ll have to face down both Cersei and Ramsay Snow again, win a fight in the fighting pits of Mereen as Ashur Forester to try and get the pit fighters on your side and face down a horde of White Walkers north of the wall with Gared Tuttle and try to get information from an imprisoned Tyrion.  I can’t emphasize enough how brutal that final decision is and it’s made even worse by the fact that you only have a few seconds to decide who lives and who dies.  I can’t even imagine what they could do to possibly top it in the final installment but I’m expecting it to be brutal.

Fallout Shelter: Finally arriving on Android devices, Fallout Shelter is a hilariously dark strategy game where you have to manage the facilities and people of a vault in the Fallout universe.  The game looks fantastic and it has this great depth of field style effect for your vault that would probably look amazing in 3D and it’s slightly more involved than games like Simpsons Tapped Out in that you have to manage the various rooms in your vault and don’t stretch yourself too thin or else your dwellers are going to be infected by radiation or starve to death.  All the grimness is offset by the charming “Pip Boy” art style and the random musings of your dwellers, who seem blissfully ignorant of how terrible things are.  It’s free on both Android and iOS with very optional things to buy with real money, so definitely check it out.