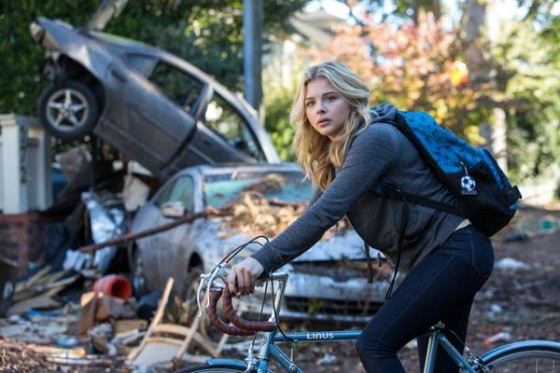 Joining the ranks of YA apocalyptic heroines like Jennifer Lawrence and Shailene Woodley, Chloe Grace Moretz stars in The 5th Wave, coming in January.  Based on the first book of a trilogy, The 5th Wave finds Earth being invaded by alien forces who unleash four deadly waves of attacks on the world, destroying the major cities of the Earth and infecting humanity with a deadly virus to name a few.  They are readying their fifth and final wave, where they take over the minds and bodies of humans but humanity is readying their final push, led by Liev Schreiber.  Chloe Grace Moretz stars as Cassie, who is trying to find her little brother in the ruins of civilization and gets help from two hunky survivors (Alex Roe and Nick Robinson).  Ron Livingston and Maggie Siff play Cassie’s parents and Maika Monroe and Maria Bello also co-star.  Check out the trailer below.