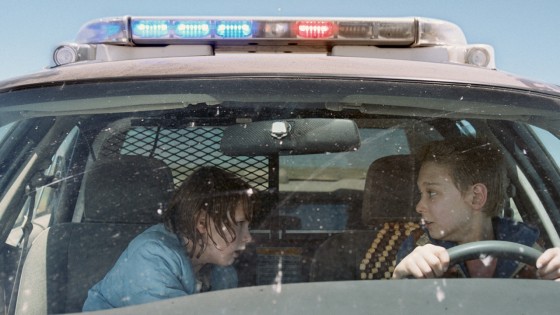 Making the rounds at the big film festivals earlier this year, Cop Car arrives on DVD/Blu Ray so everyone can get a chance to see what is up with Kevin Bacon and that sweet cop ‘stache. 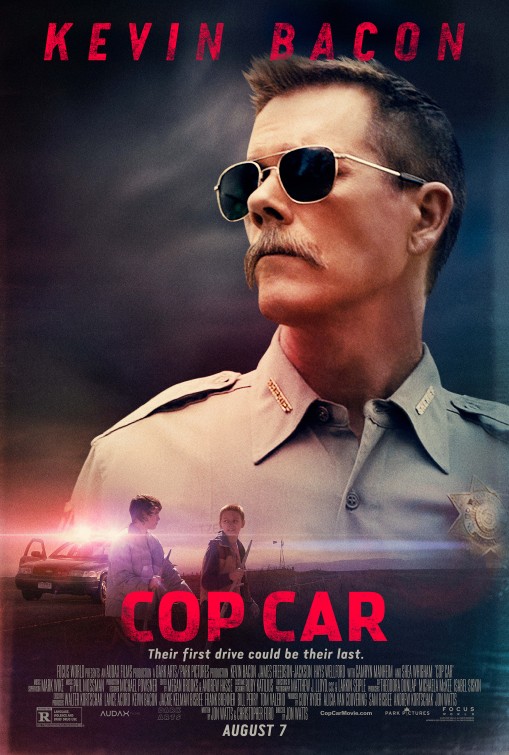 The movie follows two kids, Travis (James Freedson-Jackson) and Harrison (Hays Wellford), who stumble across a seemingly abandoned police car in a field and, after making sure no cops are around, they check it out, discover the keys are still in it, and take off for a joy ride.  Unknown to the boys, the car is the property of Sheriff Kretzer (Kevin Bacon) who left the car to perform some shady business and now needs to get it back before anyone finds what he’s left in the trunk.  If you’re looking for a really twisty, complicated plot, this isn’t that movie, even though it feels at times like Coen Brothers lite.  Things progress in a fairly straightforward manner but it feels like the focus is more on the characters and their interactions than the plot.  Things build to a pretty tense climax but it leaves things fairly ambiguous about what happens to the sheriff and the boys.

The two boys are fantastic and they feel like real friends and the movie does a great job of playing off their naive kid logic.  They don’t really know how to drive and slowly figure it out and they also, scarily at times, mess with all the various cop equipment left in the car, even the guns.  Bacon is also great and, since he’s the sheriff, he uses his police powers to get himself out of several jams and keep the lid on his missing car.  Shea Whigham, most recently seen on Justified and Agent Carter, and Camryn Manheim round out the very minimal cast.  The one thing I would have loved to have seen more of was Bacon interacting and weaseling his way out of his predicament.  A lot of his scenes are just him alone and his character feels like he could have shined if he had more chances to play off other characters.

Cop Car is a lower key, smaller scale thriller that feels like maybe an Elmore Leonard short story or one character arc of a larger Coen Brothers movie.  It’s solid but doesn’t really do anything to push beyond into greatness.  The acting is great and if you’re in the mood for a smaller crime thriller, it’s worth checking out.