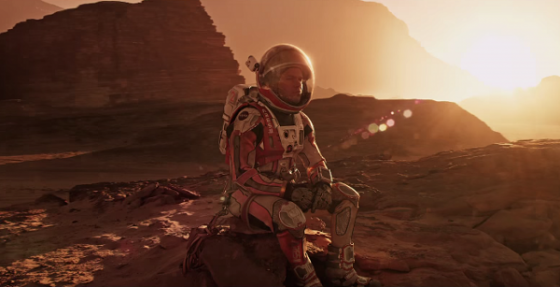 Based on universally excellent reviews and excellent source material, The Martian easily dominated the box office with the second highest October opening of all time, just barely getting beat by fellow space survival story, Gravity.  The Martian made $55 million and it’s the second highest ever opening for Matt Damon, behind The Bourne Ultimatum, and also the second highest opening ever for Ridley Scott, behind Hannibal.  It also did much better than Scott’s last sci-fi movie, the divisive Prometheus, which made $51 million.

Hotel Transylvania 2 moved down to second place with another $33 million, putting it at over $90 million for it’s two weeks out.  It only dropped about 31% from last weekend and is doing much better business than the first was doing at the same point.

Sicario finally opened wide after getting massive praise and took third with $12 million, jumping up from tenth place last week when it was in about 50 theaters.  The movie has made $15 million so far.

The Intern and Maze Runner: Scorch Trials rounded out the top five.

Everest continues to take a shocking dive after it’s incredible IMAX only opening.  It dropped from fourth to seventh this past weekend with only another $5.5 million and it’s made $33 million.

Speaking of IMAX only releases, The Walk debuted in 448 IMAX theaters before it’s wide release this coming weekend and took in $1.5 million, which is $6 million less than Everest’s IMAX opening but it could do better when it opens wide, and maybe people won’t get as sick in regular theaters.

The Green Inferno dropped out of the top ten after barely making it into the top ten last weekend, going from ninth to twelfth with $1.3 million.