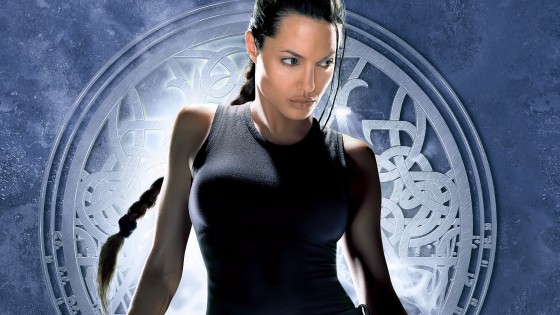 With a new game out this month, Rise of the Tomb Raider, and a number of other ways to tie it into the bigger movies this month (kick ass female protagonist like Hunger Games, Daniel Craig), we’re going to be talking about and commentating on Lara Croft: Tomb Raider for our November Movie of the Month.

Upon release, Tomb Raider was the highest grossing video game movie of all time until Prince of Persia came out in 2010.  It cemented Angelina Jolie as a major blockbuster star but her two main co-stars have also blown up since then, Daniel Craig is obviously Bond and main villain Iain Glenn is Sir Jorah on Game of Thrones. The plot is an insane mess involving planetary alignments, the Illuminati, an artifact called the Triangle of Light and crazy mish mash of accents (Jolie is an American playing British, Craig is British playing American and Glenn is Scottish playing British).  The thing I remember most is that all the lead up and like, Taco Bell tie ins, were all based around the batshit crazy opening where Lara fights a giant robot:

We’ll dive into the robot fight and more at the end of the month when we do our commentary.  If you want to watch it or queue it up, the movie is available right now on Netflix.

Movie of the Month: Frailty