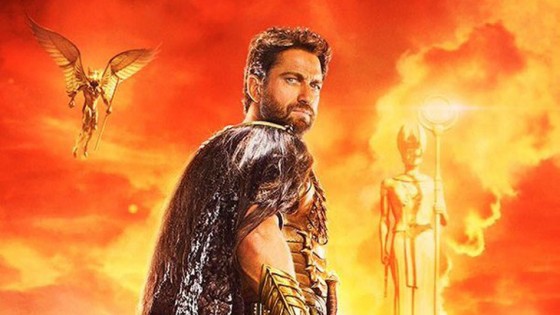 The posters made waves late last week for being eye searingly colorful and now the first trailer for Gods of Egypt is here and it’s complete and utter nonsense.  Directed by Alex Proyas, who directed I, Robot and Dark City, Gods of Egypt feels sort of like it’s trying to be Clash of the Titans but with Egyptian mythology as Set (Gerard Butler) brutally takes over Egypt (and the world maybe?) and casts out Horus (Nikolai Coster-Waldau), ripping out his eyes as the final insult.  A mortal thief, Bek (Brenton Thwaites) is possibly the only one who can get Horus’ eyes back and teams up with the fallen god on his quest.  Rufus Sewell, Geoffrey Rush, Elodie Yung and Chadwick Boseman co-star.  There’s so much going on in this trailer and not a lot of it makes sense like, apparently the gods can transform into robotic versions of themselves.  The movie is out in February next year and you can check out the trailer below.

The Full Trailer for Pirates of the Caribbean: Dead Men Tell No Tales is Here (Trailer)