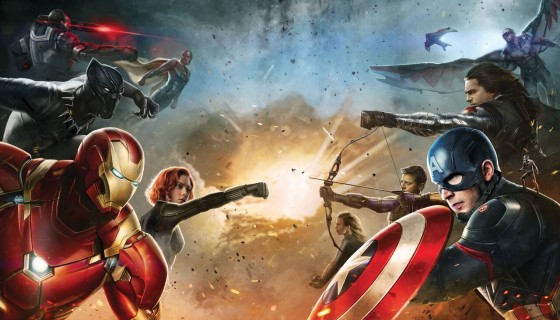 Arriving thanks to the Jimmy Kimmel show last night, the first Captain America: Civil War trailer is here and it looks like it’s picking up right where Winter Soldier left off.  As teased at the end of Ant-Man, Cap and Falcon have found Bucky aka Winter Soldier, who seems to have regained some of his memories but is the most wanted fugitive in the world for his attack on SHIELD.  Cap chooses to defy the authorities and defend his friend, which forces Tony Stark to try and either talk some sense into Cap or take him down.  There’s also some sort of new agreement for “enhanced” people called the Sokovia Accords that will place limits on what superheroes can do.  Although this first trailer is Cap focused, the actual movie is going to feature basically all the avengers, with Vision, War Machine, Black Widow and, for the first time ever, Black Panter on Iron Man’s side while Sharon Carter, Hawkeye, Falcon, Bucky, Scarlet Witch and Ant-Man join Cap.  In the middle somewhere is also going to be Spider-Man and the villainous Baron Zemo.  Anthony and Joe Russo return to direct and it looks awesome, especially the final shot of a Bucky/Cap relentless beatdown of Iron Man.  It’s out in May next year and you can check out the trailer below.