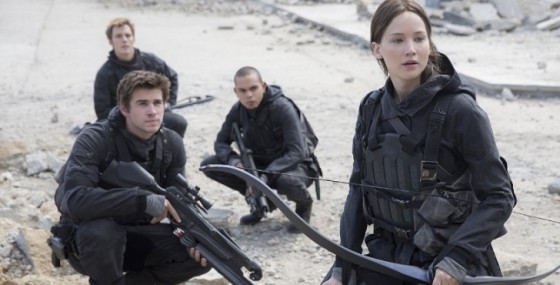 Mockingjay Part 2 managed to stay on top during the first weekend of December, despite a surprisingly strong showing from Krampus.

Mockingjay Part 2 took in another $18.6 million, bringing it to over $227 million total for it’s three weeks out.  It’s now the sixth highest grossing movie of the year, between The Martian and Minions.  It’s made over $523 million for it’s total worldwide gross but it’s still $30 million off from where Part 1 was at the same time.

Krampus exceeded all expectations by taking in $16 million, a huge step up for director Michael Dougherty, whose Trick R Treat wasn’t even released in theaters.  Krampus made $6.5 million on Friday alone, which many outlets were thinking would be it’s total for the weekend.

Creed remained in third with another $15.54 million, dropping less than 50% from last weekend’s opening.  It’s made $65 million for it’s two weeks out.

The Good Dinosaur dropped to fourth with another $15.51 million and it’s made $75.9 million for it’s two weeks out.

Spectre rounded out the top 5 with another $5 million and it’s made over $184 million, putting it second overall in the James Bond series behind Skyfall.

Nothing else really moved too much, although Victor Frankenstein is a 100% Grade A disaster, dropping to 17th place and making less than $1 million in it’s second week out.