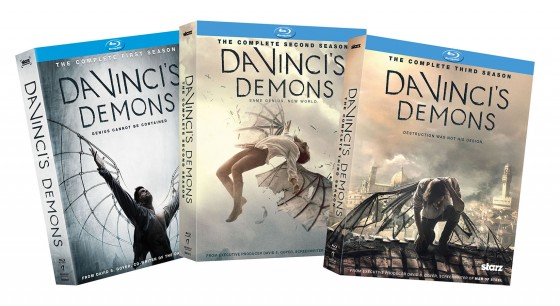 We gave away a complete set of Da Vinci’s Demons last week and a runner up prize of Season 3 and we asked for you to pitch the next historical figure who should get a re-imagining like Da Vinci and here our some of the entries we got along with our winning entries:

Henry VIII in the beginning as a villain or Ivan the terrible, someone that killed his own son would be great to write about.

From Dean D (Runner Up):

We’ve already Tesla, Da Vinci, Marco Polo, and Casanova cast in televised or film productions already. The character I think should be cast is William Shakespeare.
My pitch is that William Shakespeare has become one of the most prominent writers in all of human history. Yet the man was not without his own difficulties in life. I want to see a series where it chronicles Shakespeare during the formative years where he becomes a significant presence. Consider the many things that Shakespeare was believed to have given way to in his personal life: question of the writings he had done and their original author (whether it was he or another), his choice of religion, his sexuality (he married a woman named Anne Hathaway, and she can surely have a place here)…even his appearance can be manipulated to fulfill a form that may or may not be true to any existing portrait of him (since it’s said his true likeness is still a mystery). And the time he lives in…it’s Tudorian England! Not only would he be present for the restoration of Protestantism, and the establishment of major events during the later part of the 16th century in England, but he could also have had some involvement with their occurrence (whether as witness or a party to the doing). It would give us a pretty good historical perspective on the events. And imagine Elizabeth I having a supporting presence as well, considering she becomes a patron of his. Overall, this would be a fun character to get into. Sure, there would be a little bit of charm and comedy in it, but I do see it overall as being a living representation of one of the most legendary writers in all of humankind.

Story could begin with Cleopatra’s time in exile, and doing Tomb Raider/Indiana Jones type stuff. Possibly acquire a few MacGuffin-type artifacts that help make her somewhat of a sorceress/seductress able to raise an army and secure an alliance with Caesar. Maybe some other artifacts that reveal something about her Mesopotamian ancestry and Alexander the Great. Plus the whole Egypt/Rome setting would be fun.