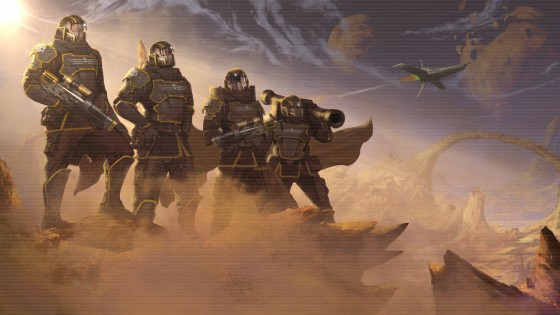 I’ve got another batch of newer games and older games that I’ve been catching up on for this edition of Gamebox 2.0

Helldivers: One of February’s PS Plus games, Helldivers lets you live out your Starship Troopers fantasies as you team up with up to four other players to take on three different invading forces that are threatening “Super Earth”.  The game is a top down shooter but it requires much more restraint and tactics than usual, as you only have a limited amount of ammo, everything can kill you or your team and there’s usually overwhelming odds.  The maps are randomized with certain objectives that have to be completed like arming a bomb, carrying a package or capturing a certain point and then you have call in a shuttle and escape.  Chris and I and frequent commentator Ryan and I played a bit and it was a ton of fun to strategize about who’s going to call in what or desperately try to revive each other while the enemies are storming in.  If you’re looking for some great co-op and you have PS Plus, Helldivers is a must check out.

A Boy and His Blob: The cult NES classic came back in 2009 on the Wii but it finally arrived on other consoles like PS4, Xbox One, Vita, PC and Mac on January 20th.  The game is about a young boy who finds a crash landed alien Blob, who is able to transform his shape based on what jelly bean he’s fed and that’s integral to traversing the levels.  The duo has to make their way through the levels and stop the evil Emperor who has taken over the Blob’s homeworld of Blobolonia.  You get a certain selection of jelly beans each level based on the types of enemies and obstacles in that level and there are four worlds that has a boss at the end of.  The art style is great and there’s lots of clever ways to use the jelly beans, the only nitpick I have is that sometimes Blob gets lost and you have to either throw a Balloon jelly bean in his general direction or constantly yell for Blob to come back to you.  That’s a minor quibble though because it’s a fun, enjoyable game that is a nice and relaxing change of pace from the more intense and violent games out there.

Wondershot: Wondershot is an interesting combo of puzzle game with a top down shooter/brawler. The single player has you trying to complete various challenges with the games arsenal of weapons, all of which are unique from one another and have their own quirks and all of them will stick to the arena walls and leave you without a weapon until you grab it again.  You can also complete these challenges co-op or battle other players in a deathmatch style arena.  It’s got kind of an Angry Birds sort of feel where the levels are very quick and the main objective is get quicker, similar to how you try to get 3 stars in Angry Birds.  The multiplayer definitely seems like it would add slightly more replay and variety but I haven’t had a chance to try the multiplayer yet.  It’s available today on Xbox One and PC and February 23rd on PS4.

Mad Max: I got Mad Max for Christmas and am about 2/3 of the way through right now.  It’s not really tied to any of the movies although it does seem to take the most influence from Fury Road, as your main enemies are War Boys and the “war rigs” and locations are similar to Fury Road.  In the game, Max loses his car yet again and allies with a hunchback mechanic named Chumbucket, who claims he can build the “Magnum Opus”, a legendary car that can possibly bring Max to the “Seas of Silence” that he’s trying to reach to get some peace.  In order to build the Opus, Max has to meet and do favors for various leaders in the region, in typical open world fashion. There are a ton of side missions like races and there are objects and outposts of the warlord Scabrous Scrotus to dismantle to lower the threat to the various regions.  The combat is taken basically from the Arkham games, with timing and parries being the keys to beating the gangs of wasteland goons Max finds.  There is also car combat as well as as you build up the Opus, you get harpoons, explosives and other weapons to take on convoys and roaming bandits.  The game is a solid open world game, it doesn’t do anything spectacular but it does a solid job of making you feel like Mad Max as you have to scavenge, find water and keep an eye on fuel and things like taking down bases is fun, as you have to scout the defenses and you can talk to other wastelanders to find secret openings and intel.  If you’re a fan of Max, I would say check this one out if it’s on sale in the future.

Saints Row 4 Re-Elected: It’s kind of crazy how different the Saints Row series got from the first one which was basically a blatant GTA rip-off to the wonderful, glorious insanity that Saints Row the Third and IV became.  I got Re-Elected on sale over the holidays on the PS Store and have been diving in over the last week or so.  Your player controlled character (or The Boss) is now the President of the United States and the other Saints are his cabinet but aliens invade and throw everyone into basically the Matrix.  Running with that Matrix reference, you get superpowers in the simulation of Steelport and have to work to rescue the other Saints and stop the aliens.  There’s too much ridiculousness to list from having Nolan North as an option for your voice, the Dubstep gun, the hilarious jab at Mass Effect’s “romance options”, literally Keith David as your Vice President and so much more.  Re-elected comes with all of the DLC, although I don’t think Gat Out of Hell is included but Enter the Dominmatrix is.  Compared to other open world games, like the aforementioned Mad Max, sometimes you just want to unleash pure unbridled mayhem and Saints Row delivers that in spades.