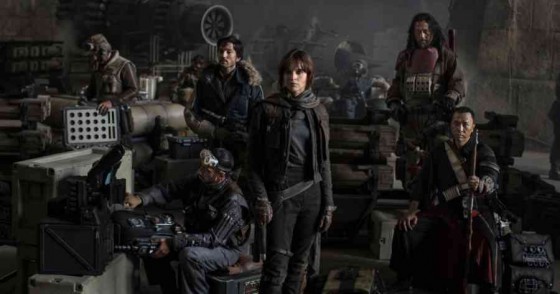 Your next hit of Star Wars from Disney arrives in December with the first “Star Wars Story”, Rogue One.  Set before the events of A New Hope, Felicity Jones stars as criminal Jyn Erso, who is recruited by Mon Mothma and the Rebellion to join a team trying to gain intelligence about a secret weapons test that is being planned by the Empire. The weapon is the just constructed Death Star and the team’s ultimate goal is to steal the plans.  Gareth Edwards, who directed Godzilla in 2014, is behind the camera and Forest Whitaker, Mad Mikkelsen, Donnie Yen, Alan Tudyk, Diego Luna and Ben Mendolsohn co-star.  It’s looks awesome, with a more gritty and action based tone than The Force Awakens and all your classic Star Wars ships and costumes are back, including old-school Star Destroyers and Stormtroopers.  The movie arrives on December 16th and you can check out the trailer below.