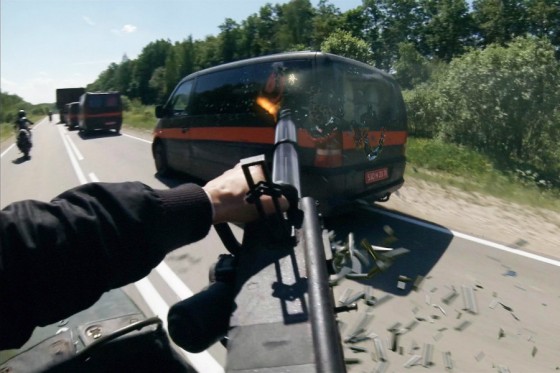 Putting you inside the head of Henry, who wakes up with no memories and a missing arm and leg.  His wife, Estelle (Haley Bennett), gives him some cybernetic limbs and tries to get his memories and voice back when mercenaries working for the crazed psychic warlord Akan (Danila Kozlovsky) break into the lab and force Henry and Estelle to flee in an escape pod.  Estelle is eventually captured and Henry teams up with Jimmy (Sharlto Copley), who keeps reappearing with different personalities after being constantly killed, to get her back from Akan and stop his plan to unleash an army of super soldiers.  The plot is bare bones but it has just enough going on that it moves things through the near constant action.  FPS video games are definitely Hardcore Henry’s main influence and most of the movie is basically Henry moving through different “levels” until the final boss fight against Akan.  There’s definitely specific moments where you can picture a button prompt popping up for a quick time event and a lot of the dialogue from characters is just telling Henry where to go next or what to do.  It also reminded me a lot at times of Crank in the level of crazy violence and scenarios Henry gets into and there’s also the fact that Henry has to “charge” up at various points in order to keep going a la adrenaline or electricity for Chev Chelios (I’m actually surprised Neveldine & Taylor haven’t already made a POV movie yet, considering one of them jumped off a cliff for Ghost Rider: Spirit of Vengeance).  If you aren’t a fan of gratitious violence and nudity, you probably should skip Hardcore Henry as it’s actually “you” getting thrust into everything and there’s no way out of seeing everything happening to Henry.

The action is pretty standard but the perspective definitely makes even the most basic shootout feel fresh.  You’ve seen a car chase, now you are in a car chase.  When things get really frenetic, the camera does go nuts and you have no clue whats going on but those moments are thankfully not very frequent.  There’s also some fun, especially toward the end, with Sharlto Copley’s character and his many personalities, as one will help Henry for a bit and then switch to a completely different personality.  Copley is a lot of fun and does the heavy character lifting for the silent Henry, as it’s usually just Copley and Henry up against a squad of faceless goons.  Danila Kozlovsky is pretty fun as well as Akan, he chews the scenery and feels kind of like a villain from the recent Far Cry games, although not nearly as fleshed out as say, Pagan Min.

The main reason to see Hardcore Henry is because it’s an experiment and nothing like it has ever really been done before.  The way it’s shot and how Naishuller and his team managed to pull off all the insane stuntwork is definitely worth seeing once for any action movie fan.  It’s not going to win any awards for it’s story or characters but you definitely won’t see anything else like it at the theater.