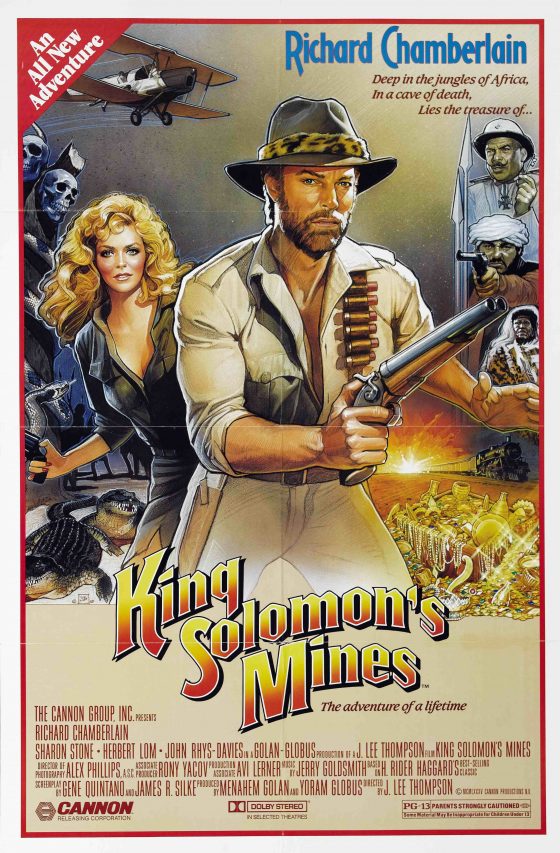 This month we’re diving into another Cannon Classic with their attempt to cash in on the Indiana Jones mania of the 80’s by bringing Indy’s public domain inspiration, Allan Quartermain, to the big screen.

Allan Quartermain has come to the screen in a number of different forms over the years and most of them haven’t been great.  Sean Connery got driven to retirement after his portrayal in League of Extraordinary Gentlemen and The Asylum delivered a mockbuster that was, if you can even imagine it, worse than Kingdom of the Crystal Skull.  Cannon’s version actually was fairly profitable and earned a sequel, Allan Quartermain and the Lost City of Gold, despite the fact that stars Richard Chamberlain and Sharon Stone absolutely despised each other.  J. Lee Thompson directed the movie and would go to direct Firewalker, The Ambassador, Death Wish 4 and more for Cannon in the 80’s and the great Jerry Goldsmith provided the score (he also had Rambo II out the same year)

The entire movie is 100% free and legal on youtube thanks to the Paramount Archive account, where Paramount is putting a bunch of Cannon and other back catalog classics up to watch.  We’ll back at the end of the month to go on “the adventure of a lifetime” with Allan Quartermain.

EA Commentary: Masters of the Universe