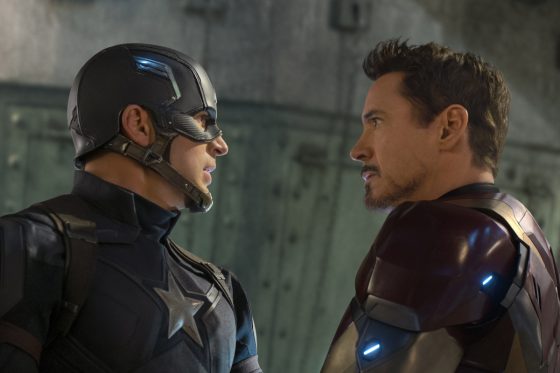 It’s been 8 years since the MCU kicked off with Iron Man and things are showing no signs of stopping or losing quality as The Russo Brothers have delivered easily one of the best entries in the franchise.

Picking up from both The Russos excellent Winter Soldier and last summer’s Age of Ultron, the new team of Captain America, Black Widow, Scarlet Witch and Falcon are in Lagos tracking Crossbones and, after a massive battle through the city, an attempt to stop a bomb results in civilian casulties.  This is the last straw for the Secretary of State, Thunderbolt Ross (William Hurt back for the first time since Incredible Hulk) and he presents The Avengers with the Sokovia Accords, which would put the team under the command of the UN.  Tony Stark is ready to sign as he’s still reeling from the guilt of creating Ultron while Cap feels they need to remain autonomous because politics and agendas shift and they could be sent somewhere they shouldn’t be or not get sent somewhere they should.  Things get even more complicated when Bucky aka The Winter Soldier is blamed for a devastating attack during the signing of the Accords, putting him and eventually Cap in the crosshair of The Avengers who did sign. Both Tony and Steve’s viewpoints are believable based on what we know about the characters and, although the movie slightly favors Cap’s side, you can easily root for either and understand why they are on the side they are on.  The movie also takes these issues seriously and the finale feels like it has the most stakes of any Marvel film, even though the world may not be on the verge of being destroyed.  The plot is also much more focused than Ultron and while there are still setups for future movies, they are integrated seamlessly here, unlike, say, Thor’s dead end swim in the magical pool from Ultron.  Daniel Bruhl does a solid job as Zemo (unfortunately not as purple hooded Baron though) and his villainous manipulations behind the scenes work much better than the convoluted schemes of Lex Luthor earlier this year in Batman v Superman.  While we enjoyed BvS here, Civil War is like a doctoral thesis compared to a high school essay as far as having iconic superheroes battle it out.

The Russos, maybe even more so than Joss Whedon, understand what makes the Marvel characters awesome and all the characters get their chance to shine in Civil War, especially during the amazing showdown between both teams at a Berlin airport.  That sequence is everything great about the MCU both with the humor, like Ant-Man’s fanboying over Cap or Spider-Man’s many quips, and the action.  Speaking of the wall crawler, Tom Holland is phenomenal and already the best movie Spider-Man in his appearance here.  Much like the aforementioned Ant-Man, Holland has that same charm that made Scott Lang so instantly likeable and it’s great to have a Spidey that actually seems like a teenager and he nails Peter’s dorky awkwardness..  The Russos also do a tremendous job of giving everything we need to know about this new Spider-Man during his intro scene with Tony Stark through dialogue and hopefully we can just forgo the origin for next year’s Homecoming.  Same thing goes for Black Panther, as Chadwick Boseman nails both T’Challa’s regal royal side and his bad ass warrior side.  All the returning characters are excellent as always and the movie is constantly throwing different combinations at each other in both combat and dialogue with either hilarious or dramatic results. They also show some love to the original Civil War comic storyline with a live action recreation of the cover of Civil War #7 and there’s an Iron Man/Captain America fight that feels like it was taken directly from that issue.

Civil War is incredible on pretty much every level and cements The Russos as the superstars of the MCU.  The action is top tier, the stakes have real weight and despite the number of characters, all of them, new and old, get at least one scene to show why they are awesome.  If this isn’t the best movie in the MCU, it’s easily top 3.