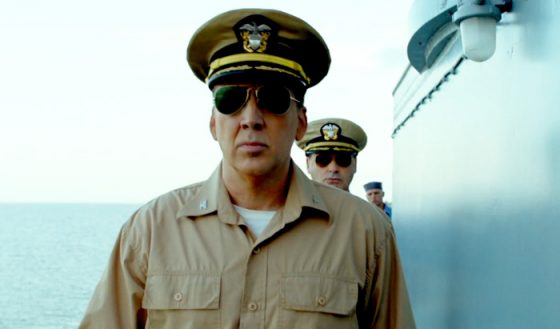 Despite starring Nicolas Cage and focusing on a swarm of sharks, USS Indianapolis: Men of Courage seems to be taking a dead serious path to telling the true story from World War II.  After delivering the atomic bomb safely to Guam, the USS Indianapolis is sent to another island in the Pacific for a training exercise but they are attacked by a Japanese sub and the ship goes down almost instantly, leaving 900 of the 1200 crewmen drifting in the ocean.  Things go from bad to worse when a swarm of sharks start picking off the men.  If you’ve seen Jaws, this is the incident that Quint describes while the men are bonding over scars on the Orca.  Aaron Eckhart, Tom Sizemore and Tom Jane co-star and Mario Van Peebles directs.  It doesn’t have a definite release date yet but it’s expected sometime this year and you can check out the trailer below.

The Sharks Are Back for Deep Blue Sea 2 (Trailer)

Miles Teller Enters the Ring in Bleed for This (Trailer)