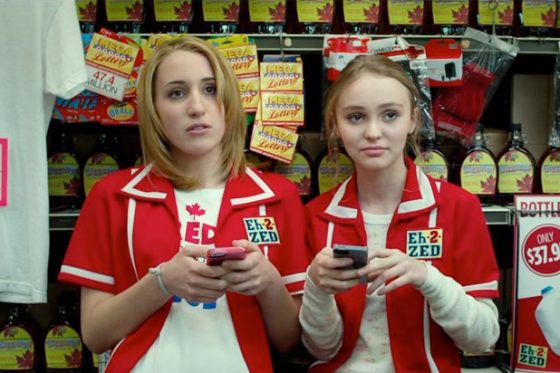 Staying in Canada after the bizarre and disturbing Tusk for the second part of his “True North Trilogy”, Kevin Smith puts his daughter Harley Quinn front and center alongside Johnny Depp’s daughter Lily Rose for Yoga Hosers.  The girls play The Colleens, best friends who share the same first name, love yoga, and work together at the local convenience store.  It seems like the movie is going to be a typical sort of high school comedy, with the girls getting invited to a senior party but then Johnny Depp’s crazy French investigator Guy Lapointe shows up, there’s an army of Nazi bratwurst and Justin Long is back as some sort of yoga guru, so based on the trailer, we have no clue what the plot of this thing is.  Haley Joel Osment, Stan Lee, Smith and Jason Mewes, Ralph Garman, Genesis Rodriguez, Adam Brody and Harley Morenstein all appear in the movie as well and it’s out on July 29th, check out the trailer (and see if you can figure out what the hell is going on) below.