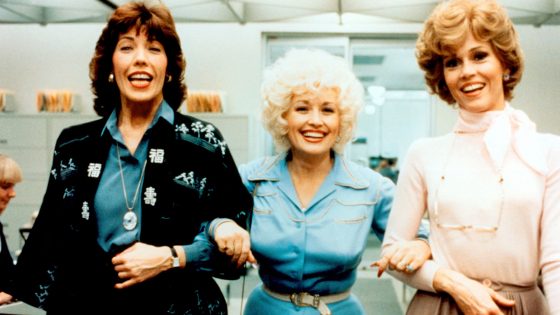 Dolly Parton has conquered so many aspects of pop culture, obviously with music but also a full theme park and cameos and starring roles in various films and TV shows, like the classic comedy 9 to 5. Dolly joined forces with Jane Fonda and Lily Tomlin to get revenge on their chauvinistic and dim witted boss, played by Dabney Coleman.  When you have Dolly starring in your movie, obviously she’s going to contribute something to the soundtrack and “9 to 5” was one of her biggest hits ever, going to number one on the Billboard charts for two weeks and getting nominated for an Oscar and multiple Grammys.  Dolly actually came up with the beat of the song when she realized if she clicked her long fingernails on a desk, it sounded like a typewriter and wrote the song while tapping away.  9 to 5 became a Broadway musical as well, with Parton writing additional songs for the show.  Check out the official music video below.