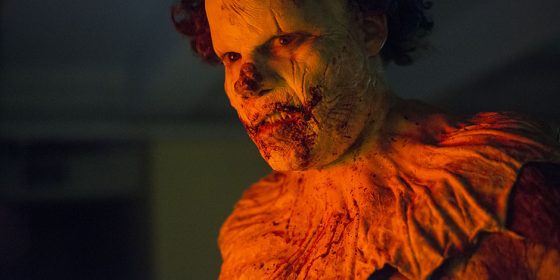 With Jon Watts heading to the big time by directing Spider-Man: Homecoming, his long shelved horror film Clown is finally arriving in theaters this summer thanks to the Weinstein Company and Eli Roth.  Roth produced the movie, which finds a father (Andy Powers) donning a clown costume for his son’s birthday when they clown they hired cancelled.  After the party, Kent is horrified to learn that the costume is not coming off and it’s transforming him into a more and more hideous clown creature every day.  The costume was apparently cursed, as Kent’s wife (Laura Allen) learns from Peter Stormare.  The clown makeup looks horrifying and it seems like solidly creepy horror movie.  It’s out on June 17th and you can check out the trailer below.