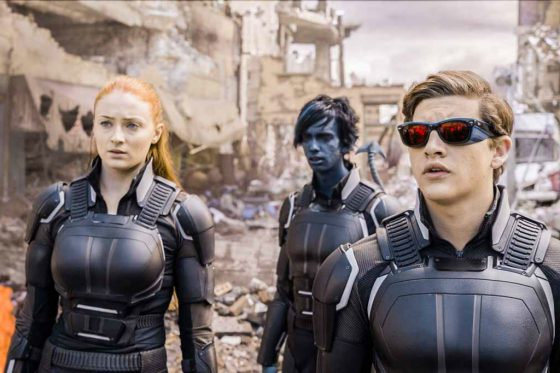 The third entry in the new rebooted series and the sixth movie overall in the X-Men franchise, X-Men: Apocalypse is a solid summer blockbuster with some cool, fun moments but it never really does anything to push it past the level of “OK”.

Set in the 80’s, Charles Xavier’s (James McAvoy) school is full of young mutants learning to control their powers, with the most recent arrivals being Scott Summers (Tye Sheridan) and Nightcrawler (Kodi Smit-McPhee).  Scott instantly becomes interested in Jean Grey (Sophie Turner), who is dealing with psychic powers that make her potentially the most powerful mutant in the world.  Meanwhile, an ancient mutant, Apocalypse (Oscar Issac), is uncovered from his ancient tomb and proceeds to recruit a quartet of mutant “horsemen” to help him wipe the slate clean on Earth and start over in his image.  One of his horsemen is Magneto (Michael Fassbender), who has suffered a tragic loss while in hiding as steel mill worker in Poland.  Despite the potentially end of the world threat, there’s a distinct lack of tension throughout most of Apocalypse, especially compared to Days of Future Past, where you saw the consequences of what would happen if the younger X-Men failed in their mission.  Apocalypse is just not a great villain, despite the efforts of Oscar Issac, whose casting is just baffling as he’s unrecognizable both visually and vocally.  You never really get a true sense of Apocalypse’s power, as the main ability he uses is teleportation and matte shifting, neither of which seems like an extinction level power.  Even when his plan is put into motion, it’s not really that interesting visually or plot wise.

Apocalypse is jam packed with mutants both old and new but the problem is that, there are so many, no one really gets a chance to make an impact.  The main quartet of Beast, Mystique, Charles and Magneto are still great but they hit the same beats they’ve hit in the last two movies (something tragic happens to Magneto, he vows revenge, for instance).  The new younger mutants are OK but no one is really a stand out, except maybe Jean based on what happens during the climax but that is more setup for another movie.  Nightcrawler gets some cool moments but nothing up to the level of the opening White House assault from X2. Some of the hyped new characters, like Jubilee, don’t even get involved in the final battle or use their powers. The new villains like Psylocke and Angel also barely register (As I thought, it feels like Psylocke is just Olivia Munn cosplaying, she has no character whatsoever)  Evan Peters is still the MVP after his scene stealing role in Days of Future Past and Quicksilver is more involved this time around and has another just incredible slow motion action sequence where he is rescuing people from an exploding building while “Sweet Dreams (Are Made of This)” by the Eurythmics plays.  There’s also an excellent and brutal cameo from Wolverine (which was hinted at in the final trailer), but if you were looking for an explanation of what Mystique did with him at the end of Days of Future Past, that is pretty blatantly left unexplained in what is another of this franchise’s continuity issues.  Speaking of continuity, as fun as the 80’s setting is, things are really starting to get noticeably ridiculous in the decade jumping of each film.  Rose Byrne’s Moira McTaggert makes a welcome return from First Class and Charles makes a comment that she looks like she hasn’t aged a day and then you remember, “oh yeah, it’s supposed to be 20 effing years since he saw her last”.  I definitely wouldn’t want the cast in old person makeup but it’s just another thing to add to the bizarre way time works in this franchise.

The core characters of Magneto, Xavier, Mystique and Beast still work and provide the structural support for this new trilogy but everything else about Apocalypse is just solid enough but not exceptional, although there are some standout sequences.  In a year that brought us Deadpool, Captain America: Civil War and even the insane mess of Batman v Superman, just being solid feels kind of disappointing.