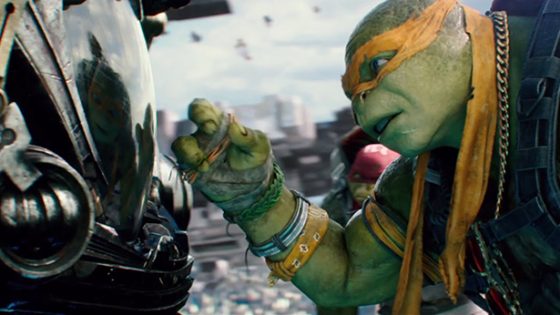 TMNT: Out of the Shadows took the top spot at the box office but it was well below the first movie’s opening.  The first Ninja Turtles move from Platinum Dunes made $65 million in August of 2014 and Out of the Shadows made $35.3 million, which it puts it between Clash of the Titans and The Smurfs on the list of similar movie openings.

X-Men: Apocalypse dropped to second with $22.8 million, dropping 66% from last weekend’s opening and it’s about $50 million off from where Days of Future Past was in the same time frame.  The movie is a hit internationally though, making $84.4 million overseas over the weekend, with $59 million of that coming from China, and it’s made over $286 million internationally so far, which added to it’s domestic gross puts it over $400 million total.

Me Before You was a surprisingly strong third place, performing well above expectations and making $18.7 million, which puts it above similar romantic book adaptations like The Time Traveler’s Wife and Water for Elephants.

Alice Through the Looking Glass and Angry Birds rounded out the top five.

Popstar was an unfortunate bomb at the box office, despite strong reviews.  It only made $4.6 million, just slightly above MacGruber and Walk Hard and below Hot Rod.  It’s not clear if it will become a cult hit like those movies but it maybe proves that the target audience for The Lonely Island at the box office is very small (it includes us though!).

In other box office news, Captain America: Civil War moved up to become the 12th highest grossing movie of all time and Zootopia is now the second highest grossing original film ever, behind Avatar, and it’s crossed over $1 billion worldwide.