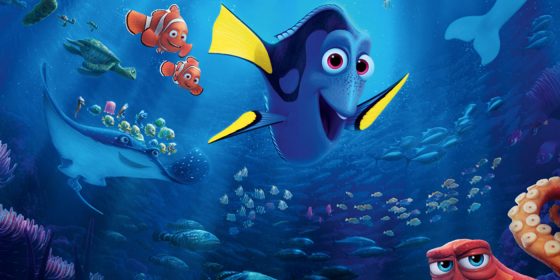 Finding Dory was expected to have a massive opening but it far exceeded even the loftiest predictions, setting the record for opening weekend for an animated film.

Dory took in $136.2 million, almost doubling what Finding Nemo made in it’s opening weekend and also setting the record for highest opening of all PG/G movies and it was the second highest ever June opening behind last year’s Jurassic World.  It was the eleventh weekend that Disney was at the top of and they are having an insane year of box office dominance.

Central Intelligence was a distant but solid second place with $34.5 million.  It was the tenth best opening for The Rock and the fifth best for Kevin Hart and had a better opening than Get Hard but failed to top either of the Ride Along movies.  Audiences liked it about on par as the first Ride Along, which went on to make over $100 million so it could have enough word of mouth to get close to that.

The Conjuring 2 dropped down to third from last week’s number one weekend, falling 61.5% to $15.5 million.  It’s about $10 million off from where The Conjuring was in it’s second weekend but should easily top Annabelle’s total run of $84 million.

Now You See Me 2 and Warcraft rounded out the top 5, with the latter falling almost 75% from last weekend but it’s domestic take does not matter at all because it’s a juggernaut in China, outpacing both The Force Awakens and Furious 7.  It’s made over $200 million in China alone and $377 million total worldwide.

Nothing else really moved to drastically on the charts and Dory should probably remain on top for another week unless Independence Day: Resurgence taps into the same level of nostalgia that Jurassic World had that fueled it to over $1 billion worldwide.