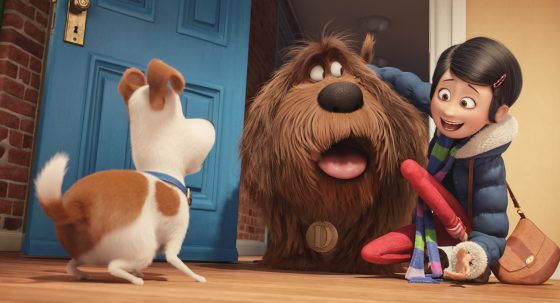 The lesson this weekend was never underestimate the appeal of cute animals, as The Secret Life of Pets had the biggest ever opening for an original animated film with $103 million, besting the previous record holder Inside Out by over $13 million.  It’s not quite up to the level of Illumination’s hit last year, Minions, which made over $115 million it’s opening weekend, but it’s second only to that movie for the studio.

The Legend of Tarzan had a suprisingly small drop from last weekend, only losing 45% and staying in second with another $21 million, putting it up to $81 million for it’s two weeks out.  It still has a long way to go to break even though, as it cost over $180 million to make.

Finding Dory was pushed down to third thanks to the overwhelming competition from Pets, making another $20 million and putting it over $423 million total, making it the highest grossing movie of both the summer and the entirety of 2016 so far.

The other new release of the weekend, Mike and Dave Need Wedding Dates, took fourth with $16.6 million, which is above expectations.  It was less than Neighbors 2 but better than Dirty Grandpa for this year’s R rated Zac Effron comedies.

The Purge: Election Year rounded out the top 5, dropping 60% from last weekend and making another $12.4 million.

Further down the list, The BFG took a massive tumble, going from fourth to seventh with $7.8 million and it’s only made $38 million so far, so it’s definitely going to be one of the rare Spielberg bombs.

Bollywood movie Sultan managed to make it onto the top 10 at tenth place with $2.4 million in only 283 theaters.

Possibly the most scrutinized weekend of the year is coming up this weekend as Ghostbusters 2016 arrives and both sides of the controversy will be be waiting to try and justify their position based on it’s performance.