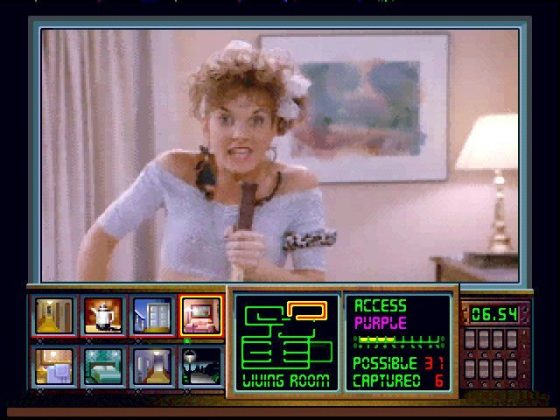 Night Trap is one of the most infamous games of all time, mostly because it’s hilariously terrible but it, along with Mortal Kombat, is what got the ESRB rating started, because Congress was horribly offended by cheesy, 80’s style horror.  The game, which was on Sega 32X, 3DO and PC, puts you in command of a bunch of hidden cameras around the house of the Martins, who are secretly vampires, and you set off traps in each room to capture “Augers”, who are strange sub-vampires who are trying to drain the blood of the girls who have arrived for a slumber party.  One of the girls, Kelly (Dana Plato), is undercover for the Special Control Attack Team, who are the people behind the hidden cameras.  If you try to beat the game as intended, you are skipping the majority of the plot, which includes the goofiest of the girls, Megan, leading the rest in a lip sync performance of the game’s theme song, which is just the “Night Trap Theme”.  The song is credited to Sunny BlueSkyes but there is no evidence of who or what that is and the only credit attributed to that entity is Night Trap.  Check out the entire sequence featuring the theme song below.