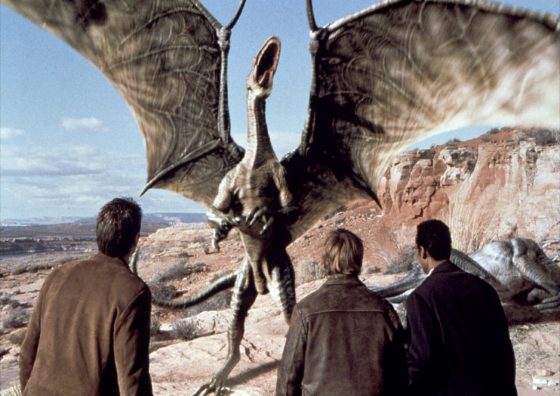 With the new Ghostbusters about to arrive in theaters, it seems like as good a time as any to talk about the very Ghostbustersesque (and underrated) Evolution from original Ghostbusters director Ivan Reitman:

Coming in the summer of 2001, and between Six Days, Seven Nights and My Super Ex-Girlfriend in Reitman’s directing canon, Evolution drew mixed to poor reviews, mostly with everyone saying it was a Ghostbusters knock-off, which it 100% is.  The thing is though, a lot of what made Ghostbusters great is in Evolution as well, especially the back and forth between the cast.  David Duchovny and Orlando Jones are excellent together, and you really get the sense they’ve been buddies for a while at the terrible community college they teach at.  Comparing them to Ghostbusters, they both sort of inhabit the Bill Murray/Venkman role, which maybe makes them not as distinct from each other as maybe they could have been but Duchovny is a little bit cooler and calmer compared to Jones, who gets to really let loose in certain scenes, like when an alien ends up inside him:

I should probably get into the plot, since there’s a good chance some people reading this haven’t seen the movie.  David Duchovny plays Ira Kane, a biology professor at Glen Canyon Community College in Arizona.  Orlando Jones plays Harry Block, Ira’s best friend and a geology professor.  A meteor hits near town and the pair, along with a field trip of college kids, find out that the meteor is carrying alien life that is evolving at an alarming rate.  The military gets wind and soon cordons off the area and brings in their own expert, Dr. Allison Reed, played by Julianne Moore.  Getting shut out by the military, Ira and Harry run into local firefighter hopeful Wayne Grey (Seann William Scott), who brings them the body of an amphibian alien killed at the country club he works at and the trio then learn the aliens have gotten out into the wider area through a series of underground caves, which leads to them having to fight things like a giant, dragon like alien at the local mall:

The basic structure is really similar to Ghostbusters as the team slowly comes together, takes on some smaller threats and then eventually have to take on a gigantic threat that threatens the entire planet.  Like I mentioned above, Duchovny and Jones kind of share the Bill Murray role while Sean William Scott fills in as the dopey heart of the team a la Dan Aykroyd (who shows up in a cameo as the Governor of Arizona).  There really isn’t an Egon equivalent, as Julianne Moore’s main character trait is that, despite her looks and knowledge, she’s super clumsy.  Normally I’m not really that big a fan of Moore but she’s pretty fun here, so this is one of my favorite roles of hers.  There’s even equivalents for characters like Walter Peck in Evolution as Ted Levine handily steps in for the role of arrogant douchebag as the commander of the military forces who cordon off the meteor site.  It even got a short lived animated spin-off a la The Real Ghostbusters, but it was worse than even Extreme Ghostbusters:

The one thing that is really missing compared to Ghostbusters is that the aliens and the means to fight them are not as interesting, which was probably one of the sticking votes for critics back in the day.  The aliens are just slightly wilder versions of Earth creatures like insects and even the outlandish ones, like the “dragon” that attacks the mall isn’t that different from creatures in other movies. There’s nothing like the proton packs or ghost traps either, the guys usually just shoot the creatures or, in the end, pump it full of Head & Shoulders, because they make a pretty big logical leap that Selenium, the active ingredient in the shampoo, is like arsenic to us based on their elemental makeup.  The finale as a whole is kind of weak but it’s not enough to drag down the entire movie and some of the great bits that preceded it.  I’ll always remember certain things like Orlando Jones yelling out “Great goooga-mooga!!!” when they see just how many aliens have escaped the military quarantine or the entire mall sequence or the part where Harry gets the bug inside of him. It’s worth mentioning as well that the score by John Powell is great and adds a ton of energy as it calls to mind classic western themes, which kind of matches the desert landscape of the movie:

If you’ve never seen Evolution, it’s definitely worth checking out.  The cast is great and it shares a lot of what made Ghostbusters a comedy classic, even if it never really reaches that level.  I’ll leave you with a handful of some of my favorite quotes from the movie:

Ira Kane: If I was a giant nasty alien bird in a department store, where would I be?

Ira Kane: Not you, the bird.

Ira Kane: Isn’t there anything else you can do? He thinks he’s an athlete.

Harry Block: Hey, beneath this calm, sexy exterior beats the heart of a true scientist!

Harry Block: You going to finish that bacon?