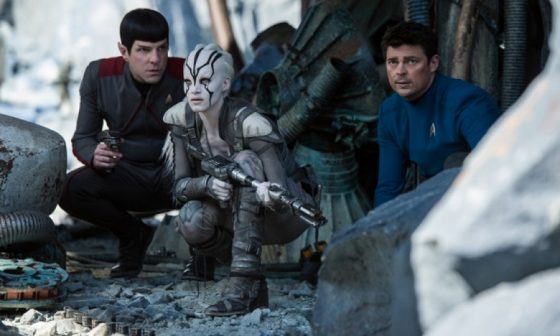 Star Trek Beyond easily took the top spot at the box office this weekend with $59.6 million.  It’s below both previous films by about $10 million.  Star Trek made $75.2 million in 2009 and Into Darkness made $70.2 million in 2013.  It has strong reviews from both critics and fans but it’s up against Jason Bourne during it’s second weekend next weekend, so it could be tough to stay on top if that movie gets good reviews as well.

The Secret Life of Pets dropped to number 2 with another $29.6 million, putting it over $260.9 million for it’s two weeks out and it’s the seventh highest grossing movie of the year so far.

Lights Out took third with $21.6 million, which is over four times it’s budget of $4.9 million.  It’s not quite on the level of The Purge or Conjuring series but it’s one of the better horror openings for the year.

Ice Age: Collision Course barely took fourth with a mediocre $21.4 million opening, the worst ever opening for the series and 55% less than the last entry but, for some reason, the Ice Age movies do gangbusters overseas so, much like Warcraft, it’s going to rely mainly on the international box office to make some money.  It’s already made $178 million from overseas.

Ghostbusters rounded out the top 5, dropping 54% from last weekend’s opening with another $21 million, putting it over $86 million for it’s two weeks out.  It’s the biggest drop between the opening and second weekend for Paul Feig and Melissa McCarthy, as their previous team-ups have only dropped around 35% from the opening weekend into the second.

Further down the list, crazy conservative documentary Hillary’s America went wide and jumped up from 37th last weekend to ninth this weekend with $4 million and it had the highest opening of the three films by director Dinesh D’Souza.

Mike Birbiglia’s movie Don’t Think Twice opened in only the Landmark Sunshine Theater in NYC and made $92,835 which gives it the highest per theater average of 2016.

Battle at the Box Office 8/1