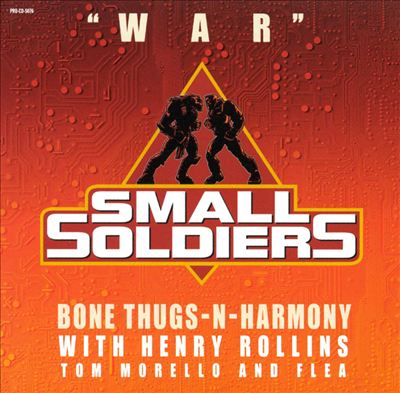 The soundtrack for Small Soldiers was mostly remixes of classic rock songs with hip hop and rap stars adding their own spin, like Queen Latifah on Pat Benetar’s Love is a Battlefield or Wyclef Jean on Another One Bites the Dust by Queen but the one full on cover was Bone Thugs-N-Harmony doing a new version of Edwin Starr’s classic song War, which was an anti-Vietnam War song that also happened to rock faces off.  The Bone Thugs recruited Henry Rollins, Tom Morello and Flea to join their version and it’s pretty violent and dark for being on the soundtrack for a kid’s movie.  There’s a verse where Henry Rollins talks about his friend getting killed by a mugger or something but that is also happening while in the music video, Rollins is controlling a giant Chip Hazard robot fighting an Archer robot in a boxing ring.  The music video is one of the most insane things I have ever seen and you definitely need to check it out below.