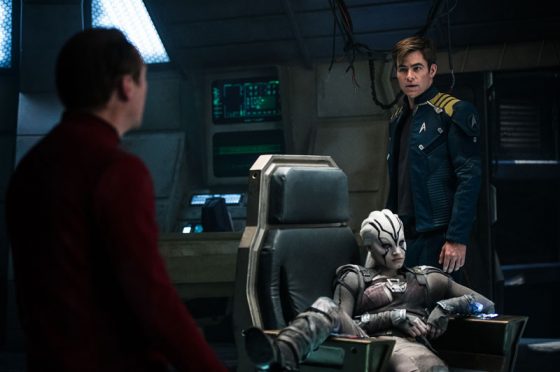 The third entry in the rebooted Star Trek universe, Star Trek Beyond puts the Enterprise crew in their most perilous position yet as they are marooned on an unknown planet following the destruction of the Enterprise.

Three years into their five year mission, the Enterprise crew is refueling and restocking at the Yorktown space station when an alien survivor requests help to save her crew from a nearby planet that is surrounded by a dangerous nebula.  The Enterprise having the best scanning and navigation is tasked with investigating but they are ambushed and the Federation’s flagship is destroyed, leaving the crew scattered across the planet, with most of them ending up as prisoners of the ruthless new villain Krall (Idris Elba).  Although we’ve seen the Enterprise take a beating in the previous two movies, it’s destruction here is a huge, spectacular setpiece where pieces are ripped off by Krall’s swarm of “bees”, drone fighters that smash their way through the ship.  I would say probably the whole first third of the movie is the attack on the Enterprise and it definitely feels like new director Justin Lin is putting his stamp on the series by literally destroying the main location of the films.  Lin also brings his skills at character dynamics that he honed in the Fast & Furious series as there are fun combinations you don’t normally see from Trek, like Spock and Bones, Chekov and Kirk and Uhura and Sulu.  Karl Urban is a delight as always and digs in even more into Bones’ southern fried pessimism and has some excellent back and forth with Zachary Quinto’s Spock.  Probably thanks to Simon Pegg co-writing the script, Scotty gets the most he’s ever gotten to do in the series so far and is the first one to befriend the crew’s new ally Jayleh (Sofia Boutella), who is an excellent addition and fits in instantly with the Enterprise crew, sharing Scotty’s mechanical skills and Kirk’s love of “classical” music like Public Enemy and Beastie Boys but also being able to kick ass.  Chris Pine is still doing solid work as Kirk and Zoe Saldana, John Cho and the late Anton Yelchin have all perfectly settled into their roles over three films.  Idris Elba can never not be great but Krall is a pretty generic villain for most of the movie until there’s a late game revelation about his relationship with the Federation but it’s something you can probably guess well before it’s revealed in the film.  This series has had three excellent actors as villains and none of them have really popped.  For old school Trek fans, there’s a wonderful tribute to Leonard Nimoy and a throwback easter egg to the OG Enterprise crew.

If there’s one thing Justin Lin knows, it’s action but I was kind of shocked at how incoherent some of the action was in this movie.  A lot of the beginning is in darkened hallways of the under siege Enterprise and there’s a lot of the really shaky camera work a la Bourne Supremacy/Ultimatum that I thought we were kind of getting away from.  When things are in the daylight or wide, Lin shines, like the great bit where Kirk rides an old school motorcycle to distract Krall’s men while a rescue attempt gets underway but there are some phaser shootouts and hand to hand fights that are either hard to see or the editing is really choppy.  The finale also feels a little familiar as it’s another race through a future city to catch the villain, much like the Spock vs Khan sequence at the end of Into Darkness.  The location is definitely more interesting, as Yorktown’s layout is almost like the Halo from Halo where the structures are built on interlocking rings and there’s also some weird gravity stuff that comes into play as well but it’s just OK for the most part.  In the two sequels, nothing has come close to topping the “Fire Everything!!!!” moment from Star Trek.

The strength of Star Trek Beyond is the characters and it’s just a joy to hang out with this new Enterprise crew.  Three movies in, they’ve all settled into the new takes on the original crew and there’s an easy back and forth between everyone.  New character Jayleh fits right into that back and forth and hopefully we see more of her in the sequels.  Most of the action is fine but some of it is shockingly incoherent from the man who brought us the Rio finale from Fast Five.  If you enjoyed the previous two Star Trek movies, you’ll definitely enjoy Star Trek Beyond but it might be the weakest of the series so far but it’s not bad by any stretch of the imagination.  It’s definitely a bright spot in what’s been a fairly mediocre summer.