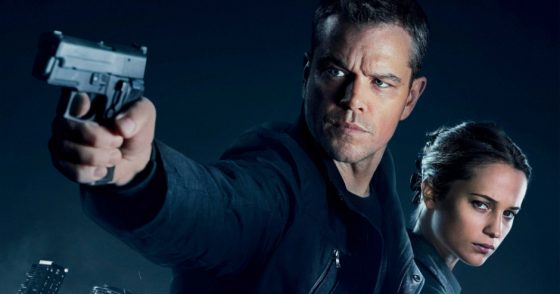 With Matt Damon back as Jason Bourne, the movie of the same name had the second highest opening for the franchise behind Bourne Ultimatum with $60 million.  It’s up $22 million from the Jeremy Renner led Bourne Legacy and it also opened higher than last year’s Mission Impossible entry, Rogue Nation.  It’s also the second highest opening ever for Matt Damon between Ultimatum and The Martian.

Star Trek Beyond fell almost 60% from last weekend’s opening, taking in another $24 million and putting it just over $105 million for it’s two weeks out.

Bad Moms opened to third with $23.4 million, the fifth highest R rated comedy opening of the year, topping the most recent one, Mike and Dave Need Wedding Dates by about $6.5 million and slightly less than Melissa McCarthy’s The Boss made earlier in the year.

The Secret Lives of Pets and Lights Out rounded out the top 5.

Nerve took in $9 million for the weekend and took eighth place and $15 million total since it opened on Wednesday last week.  It’s slightly less than Unfriended and it’s on the lower end of openings for both Dave Franco and Emma Roberts.

Woody Allen’s latest, Cafe Society, opened in 565 theaters and took in $2.3 million, which is up from the last few Allen openings like Magic in the Moonlight or Irrational Man.